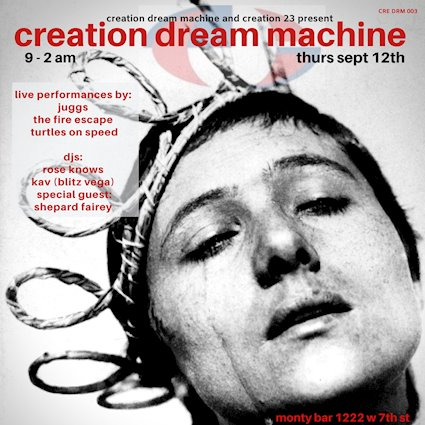 It’s no secret that Creation Recordsmastermind Alan McGee has launched a new label – Creation23 Records. Gone are the days of releasing albums by Oasis, Primal Scream, My Bloody Valentine, Ride, Swervedriver, Teenage Fanclub and Slowdive, but the zeitgeist and DIY ethos still remains in McGee’s ear-to-the-ground litmus test of who he chooses to work with. And his undertakings very much continue to significantly impact on the music scene today.

With all the buzz leading up to Danny Boyle and Irvine Welsh’s forthcoming film, centered on McGee’s life and Creation Records itself, Los Angeles is the latest locale with interest in spreading Creation’s good news. On Thursday, September 12, Creation Dream Machinetakes up residence at The Monty Bar(1222 W. 7th Street & Garland Ave.) This event is one of two such events to occur before the end of 2019 with many more planned.

Performances include music by JUGGS, Turtles on Speed, The Fire Escape, andDJ sets by Shepard Fairey (Obey), Kav Blaggers (Blitz Vega, Happy Mondays) and Renaissance woman and music selector DJ Rose Knows(Lethal Amounts). Based on the concept of A Thousand Points of Light, this event aims to raise vibrations, forging the spirit of creation in musik DIY punk energy.

This Creation Dream Machine was born from the long-term relationship between Texas Bob Juarez (Television Personalities, Rose McDowell), an L.A. resident, and Alan McGee, founder of the legendary Creation Records and its new incarnation Creation23 Records. They forged the daydream together over several conversations surrounding a revelation Juarez had following My Bloody Valentine’s July 2018 concert in L.A. With McGee’s endorsement and support, the wheels were set in motion for this series of Creation events.

Texas Bob Juarez is best known as a member of UK post-punk band Television Personalities, a foundational band for Creation Records who were widely influential, especially on the C86 generation, many Creation Records artists, and bands like Pavement and MGMT. Since then, Juarez has collaborated with McGee for other Creation events, such as the Creation Sessions in Liverpool and Edinburgh, the Creation Tabernacle Venue in Wales, McGee’s national UK charity events like Musicians against Homelessness, and the more recent Creation23 Showcases at the Social London.*This project of music and spirit of the Creation Dream Machine is based on Brion Gysin’s Dream Machine, Magic/k, synchronicity and synesthesia… Wielding frequencies, we swirl and grow towards love and healing, reaching one’s zenith out of the chaos. Welcome to the Dream Machine,* says Texas Bob Juarez.

The staple residents for all Creation Dream Machine events for 2019 are JUGGS, a two-piece feel-good electronic outfit who are among Creation23 Records’ newest signings. They are also the only band from this label based in Los Angeles. Consisting of Brandon Rauch and Willem Wolfe, who happens to be Billy Idol’s son. Their funky, electronic, poppy music shares a punk ethos in their attitude and the way they make music.

“Our favorite bar in town is The Monty Bar. They always put on amazing Halloween shows with a Cramps cover band (their ‘Flame Job’ LP was also out on Creation) and they generally have excellent goth and post-punk nights. The best thing about the Creation Dream Machine is that this is really friends who share an artistic community and interest in throwing a party together.  That’s the point…to go out and party and let loose with your friends and just be in one space together with some cool music,” says Brandon Rauch.

Turtles on Speed is a trio who, as Buzzbands L.A. note, are “like Teenage Fanclub getting a high-five from Redd Kross — lovable reprobates making thoroughly likable music”

Kav Blaggers (a.k.a. KAV) is well known as a solo artist, former member of Happy Mondays, and founder of Blitz Vega with Andy Rourke (‘The Smiths). As a solo artist, KAV performed as part of the London Olympics and also at SXSW, CMJ and many festivals and shows on both sides of the Atlantic, including with Kasabian. As a DJ, KAV has toured on line-ups with New Order and James Brown, among others, playing clubs across Asia, Europe, South and North America.

Shepard Fairey – a great Creation Records enthusiast – is a graphic artist and social activist who is part of the Street Art movement along with others like Banksy and Mr.Brainwash. Fairey blurs the boundary between traditional and commercial art through type and image, communicating his brand of social critique via prints, murals, stickers, and posters in public spaces. His seminal Obeyseries pushed Fairey into the public spotlight, but he is perhaps best known for his Hope (2008) campaign, which portrays a portrait of then-presidential candidate Barack Obama and a series of posters featuring portraits of culturally diverse women in response to Trump’s xenophobic rhetoric. 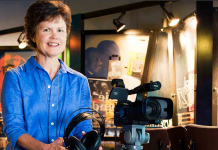