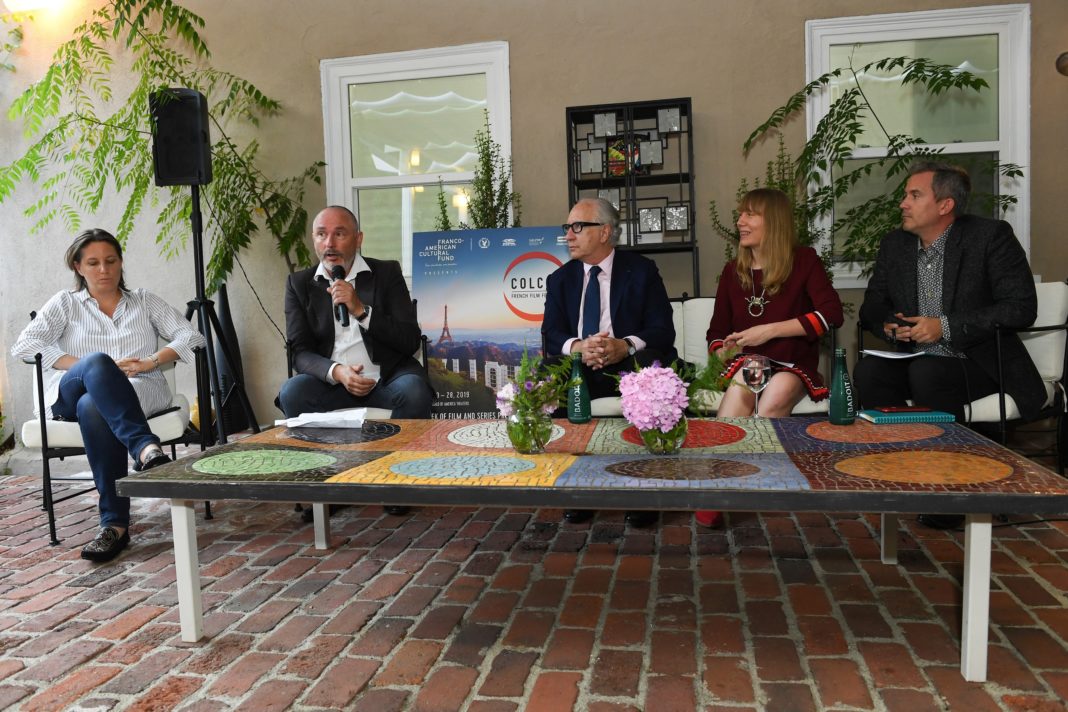 The festival, which typically is held prior to the Festival de Cannes each year at the Directors Guild of America in Hollywood, moved its dates to September 23-28 to accommodate the venue’s elaborate renovation, and for the first time, making it part of Hollywood awards season.

Also in attendance were DGA board members Taylor Hackford and Michael Mann, who described the renovation and state-of-the-art technical improvements to the venue and its theatres.

Different from past years, many of the films presented at the 2019 Festival de Cannes will now have their North American or US premieres at COLCOA, and this fact was very evident with many of the panel members mistakenly referring to “this year’s Cannes” when they actually meant “COLCOA.”

“This high-profile program includes several films from Cannes and Venice programmed for the first time in the U.S., as well as films presented before their release in France,” said Truffart.  “It shows the faithfulness of distributors, producers and sponsors, who strongly believe that COLCOA has become an established event in Hollywood.”

COLCOA is considered the largest festival dedicated to French films and series worldwide and will feature over 25 film premieres in competition for the COLCOA Cinema Awards.

The festival will open on September 23rd with the U.S. premiere of Amazon Studio’s “Les Miserables” by Ladj Ly, winner of the Cannes Jury Prize and the 2019 D’Ornano-Valenti Prize.

The COLCOA Classics will include an homage to late writer and director Agnès Varda and French composer Michel Legrand with a special presentation, in association with Rialto Pictures, of the 1962 breakout film “Cloe from 5 to 7.”

Presented with the support of Unifrance, 16 short films will be in competition for the COLCOA Short Awards, to be presented every afternoon from September 24-27.  Additionally, the competition will be available in the U.S. after the festival on the cinema-on-demand program of official festival partner TV5 Monde.

Celebrating its 12th year, the popular COLCOA High School Screening Program will run for five days during the festival with the Los Angeles premiere of the musical coming-of-age tale “In Your Hands” by Ludovic Bernard. More than 3,000 Southern California students and teachers are expected to attend free screenings and conversations, as well as participate in a student film critic contest. The program is produced in partnership with ELMA – European Languages and Movies in America, with the support of American Association of Teachers of French – Southern California. Additionally, master classes will take place at several film schools across the city with the support of the Cultural Services of the French Embassy in the US and ELMA.

COLCOA French Film Festival is presented by the Franco-American Cultural Fund, a unique collaboration between the Directors Guild of America, the Motion Picture Association, the Writers Guild of America West, and France’s Society of Authors, Composers and Publishers of Music (SACEM). COLCOA is also supported by France’s Society of Authors, Directors and Producers (L’ARP) the Film and TV Office of the French Embassy in Los Angeles, TV France International, and Unifrance.

For the full program and ticket information, please visit www.colcoa.org