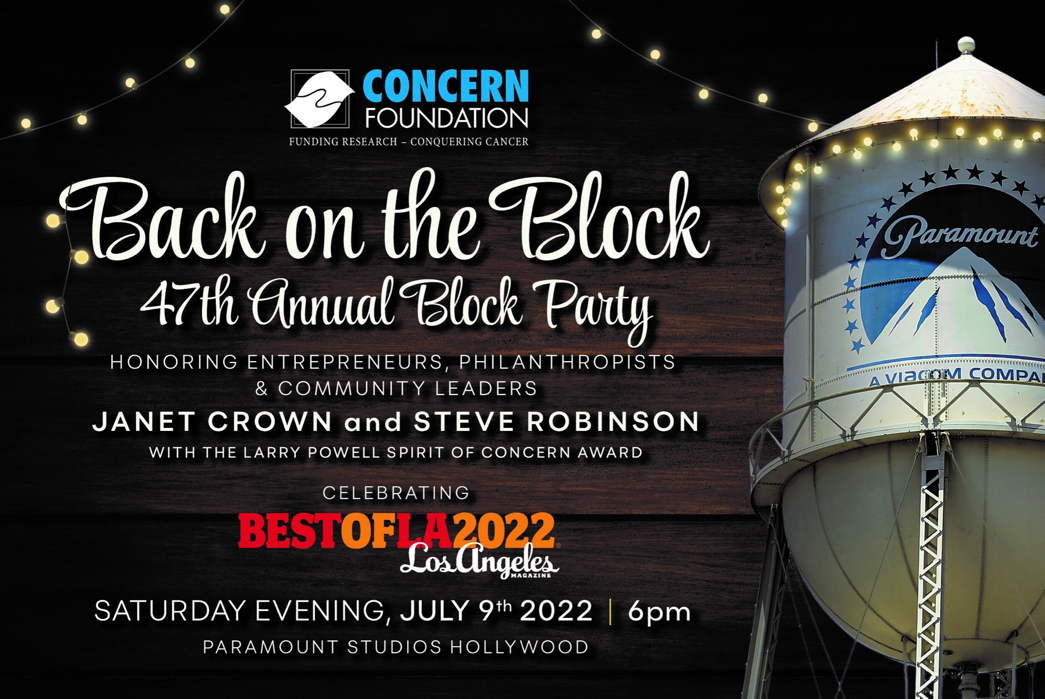 On Saturday evening, July 9, 2022, Concern Foundation’s 47th Annual Block Party https://www.concernfoundation.org/block-party  will be back on the block at Paramount Studios Hollywood after two years of virtual events due to COVID-19 health and safety concerns. The anticipated sold-out event is expected to be attended by over 3,500 guests with a goal to exceed our previous record $1.8 million dollars raised for cancer research.

The backlot streets will be filled with plenty of musical and interactive entertainment on multiple stages featuring the Tom Nolan Band, D’ City Sound & Events, and the Vibrato Grill Jazz stage. Throughout the venue guests will find photo studios, lounges, casino style gaming, and spa services provided by the Beauty Bus Foundation. One of the highlights of the evening will be the online silent and live auctions underwritten by ZACUTO GROUP that will feature items and packages including one-of-a-kind opportunities, concert and event tickets, restaurants, staycations, golf packages and so many other wonderful items donated by our friends throughout the community.

For the 16th year, Concern is honored to celebrate The Best of LA 2022® on Los Angeles magazine’s street, which will feature lounges, photo booths, food stations, DJ dancing and much, much more. Once again, Los Angeles magazine will donate another $25,000 to Concern to help further our mission.

Who:  This year Concern will be honoring entrepreneurs, philanthropists and community leaders Janet Crown and Steve Robinson with the first ever Larry Powell Spirit of Concern Award named after one of the founders of the organization.