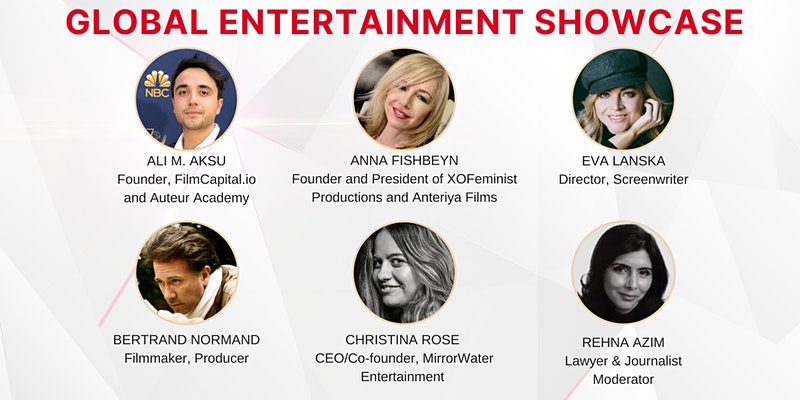 Cloud 21 PR International and Kultura PR International  are pleased to present the fourth annual “Global Entertainment Showcase” a special event that will be held virtually during this year’s Festival de Cannes and French Riviera Film Festival.

Please register for the complimentary event at:  https://www.eventbrite.com/e/4th-annual-global-entertainment-showcase-registration-161339632183

“We usually hold our events at the Russian Pavilion in the International Village at the Palais des Festival during Cannes, but this year we decided to schedule the event as the perfect opening of our film festival that celebrates short films,” adds Gotham Chandna, president, Cloud 21 International.

The by-invitation only event will host a panel featuring the top names and rising stars of the global content industry, including:

Ali M. Aksu is an international film producer, director and entrepreneur. He is the executive producer of several groundbreaking projects, including the first-ever Hollywood feature film to cast digital media talent, that was distributed by Universal Studios. He is the founder of FilmCapital.io, a community focused Hollywood crowdfunding platform that was incubated at Singularity University, and Auteur Academy, an educational platform to empower independent filmmakers. Aksu is the Southern California Young Professionals Ambassador at the United Nations Association of America. He is an MBA candidate at Chicago Booth School of Business. He holds a B.A. in economics, with a minor in film, TV and digital media from UCLA, and earned executive-level degrees from MIT, Wharton and Singularity University.

Anna Fishbeyn, Founder and President of XOFeminist Productions and Anteriya Films (Russia/USA),is an award-winning star of stage and screen, a filmmaker, director, author and actress.

Her movie Galaxy 360: A Woman’s Playground, which she wrote, directed and starred in, will be released in theaters and on major streaming services this year. The pre-release version of the film screened to a packed house at the Cannes and Big Apple film festivals and was a finalist of the Sundance New Frontier Exhibition.

Anna’s first play Sex in Mommyville premiered in New York City and was recommended by Bloomberg News, while CBS Radio pronounced her “a comic genius.” Her second play My Stubborn Tongue played off-Broadway at NYC’s New Ohio Theatre and went on tour to the West End in London at the Soho Theatre.  Her solo cabaret show at the Metropolitan Room in NYC Anna on Fire and Uncensored was recommended by CBS News New York, Jewish Week, and NiteLife NYC.

Anna wrote and starred in the award-winning web series Happy Hour Feminism and directed and starred in Invisible Alice, a short musical film is currently on the festival circuit.

Across her films, Eva studies the concepts of acceptance and love in challenging circumstances. Her film, Little French draws attention to the global stigma against interracial marriages through the relationship of an Orthodox Jewish woman and a Muslim man.  In 2020, Little French Fish was selected by one of the world’s oldest and largest Jewish festivals, the Washington Jewish Film Festival. Her previous picture Okay, Mum, won Best Picture at the Los Angeles Film Festival and was selected for the Short Film Corner at the 2017 Cannes Film Festival.

She recently announced her first feature I Am Not An Actress, inspired by the philosophies of Brigitte Bardot, and will soon unveil her first documentary The Abraham Accords Change History: Women in the Middle East, filmed during the pandemic.

Bertrand Normand is a French filmmaker and producer. A graduate of Canada’s Vancouver Film School, he has directed both narrative short films and documentaries.

His latest short film, The Photographer, has participated in more than 70 festivals internationally and obtained 13 awards. His most renowned documentary, Ballerina, a portrait of five Russian ballerinas from the Kirov Ballet, has been released worldwide. His latest documentary The Rocking Baritone has just been completed.

In 2016, Normand founded the production company Les Films du Jour Prochain, which has produced the short films The Taste of Ginger, by Jean-Robert Thomann and Iskra, by Adrian Replanski. He is currently developing and producing a number of narrative films and feature-length documentaries internationally.

CEO/Co-founder,MirrorWater Entertainment LLC (MWE)Christina Rose is an American-German director, producer, and screenwriter and is part of the new Hollyworld Movement, bringing entertainment to the global world. She has worked in North America, Europe, Africa (the famous Atlas Studios in Ouarzarzate), and Asia. Together with her brother Michael, she co-founded MWE.

Prior to setting up a production company, Rose worked at such prestigious companies as Arad Productions (The Amazing Spiderman), Exclusive Media (Rush, Ides of March), in distribution at ZDF-Enterprises, where she has developed numerous projects with Michael Hirst (Vikings) and William J. MacDonald (Rome). Most recently, she was an executive at the European network Sky, acquiring new projects for development.

Rose has produced a number of documentaries and TV shows for the international market and is currently finishing her anticipated six-part documentary series Wonder Women where we meet young women leaders in underrepresented industries around the world who are redefining leadership for a better future. The series will premiere this August at the 10th Anniversary of “Kat Kramer’s Films That Change The World,” which is themed this year as “Sheroes For Change.”

The panel will be moderated by Rehna Azim, a London-based practicing lawyer and freelance journalist who writes mainly about film and lifestyle topics. She was previously the editor of a glossy women’s magazine and is currently awards editor at www.moviemarker.co.uk. Her site www.itsalawyerslife.com is a lifestyle and wellbeing blog for lawyers by lawyers. She has written and produced four short legal dramas.

Premiering on It’s A Short on July 12 and 13, 2021, French Riviera Film Festival celebrates short film and short-form content from around the globe, featuring the works of filmmakers from more than 20 countries. The full list of finalists in the categories of Drama, Comedy, Documentary, Sci-Fi/Horror, Animation, Experimental, Music Video and Fashion is available at: https://frenchrivierafilmfestival.com/finalists-2021/

The festival will culminate on Bastille Day (July 14) with a special online awards ceremony to air on It’s A Short to feature live and pre-recorded segments, celebrity hosts and guests, musical performances, and some surprises.  Special Lifetime Achievement and Industry Excellence awards will be presented in person at an exclusive reception at the iconic Beverly Hills Hotel.