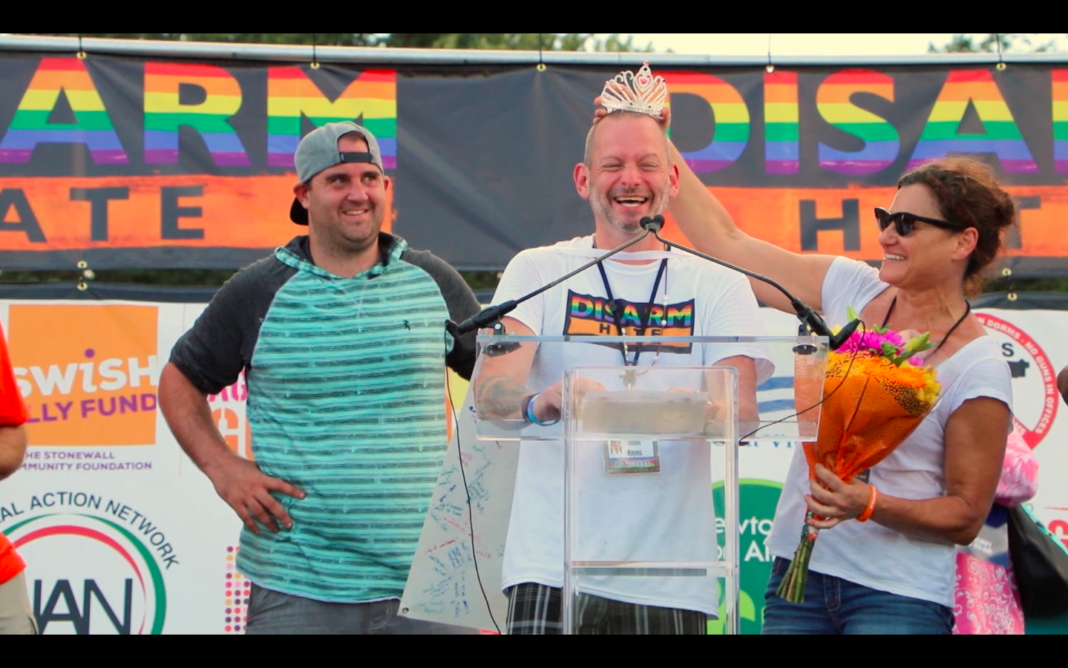 Feature documentary Disarm Hate, narrated by Harvey Fierstein, is now available worldwide via multiple streaming platforms. The ﬁlm seeks to create awareness about gun violence against the LGBTQ+ community following the 2016 Pulse Nightclub massacre in Orlando that took 49 lives as the impetus.

Directed by Julianna Brudek, the film chronicles nine diverse LGBTQ+ activists who come together after the Pulse nightclub massacre to join Jason P. Hayes, a hairdresser, and an activist from New Jersey who is on a crusade. Without political experience, Hayes builds a national rally to demand LGBTQ+ equal rights, fight the NRA, and challenge America’s obsession with gun violence.

“I wanted to bring awareness to how disproportionately gun violence has aﬀected the less privileged members of our community. Two weeks before Matthew Shepard was brutally murdered, Rita Hester, a trans woman of color was murdered, and the media buried the story. Forgotten forever,” comments Brudek.

She adds, “I did not want that to happen to the Hispanic LGBTQs that lost their lives at Pulse Nightclub. As a community, we must remember the hate crimes, and work together to stop the violence perpetrated on each one of us.”

Beginning as a road trip, the journey turned into so much more than anyone could have expected. Exploring their similarities and diﬀerences, the group develops a life-changing bond as they visit prominent sites of gun violence that have aﬀected LGBTQ+ people nationwide. This common ground opens discussions between the travelers and the people they meet along the way, that look to alleviate these horriﬁc hate crimes and bring a better understanding for all.

The renowned trans activist and media personality Ashlee Marie Preston who is a cast member and an executive producer says, “The threat of gun violence is intersectional. When someone’s identity overlaps with multiple marginalized groups, their risk is compounded. Black Americans are 10 times more likely to be murdered with a gun than white Americans. Being a woman and trans exacerbates those odds.”

She continues,  “Disarm Hate which focuses on the discriminatory culture within America that informs the violence marginalized communities face. If we are ever to eradicate gun violence, we must interrogate the attitudes and beliefs that fan the flames of hate. Our journey was not about taking away people’s guns, it was about removing the barriers that obstruct their ability to recognize our humanity.”

The documentary successfully probes the emotional journeys of the activists, who squabble, laugh, cry, and even fall in love over the course of their trip. It also examines opposing views and counterpoints to their calls for gun reform from a pro-gun perspective, as they visit a shooting range and engage with a member of the Pink Pistols, a pro-gun LGBTQ+ group.

Harvey Fierstein sums it up with, “Never be bullied into silence. Never allow yourself to be made a victim. Accept no one’s deﬁnition of your life; deﬁne yourself.”