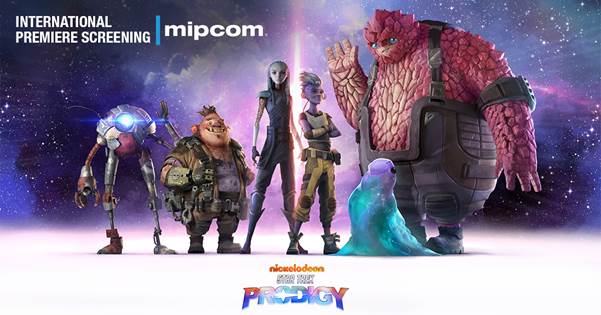 William Shatner’s upcoming journey “to boldly go where no man has gone before” is not the only Star Trek news this week.

Developed by Emmy® Award winners Kevin and Dan Hageman (Trollhunters and Ninjago), the CG-animated series Star Trek: Prodigy is the first Star Trek series aimed at younger audiences and will follow a motley crew of young aliens who must figure out how to work together while navigating a greater galaxy, in search of a better future. These six young outcasts know nothing about the ship they have commandeered – a first in the history of the Star Trek franchise – but over the course of their adventures together, they will each be introduced to Starfleet and the ideals it represents.

Star Trek: Prodigy is from CBS’ Eye Animation Productions, CBS Studios’ new animation arm; Nickelodeon Animation Studio, led by President of Animation Ramsey Naito; Secret Hideout; and Roddenberry Entertainment. Alex Kurtzman, Heather Kadin, Katie Krentz, Rod Roddenberry and Trevor Roth serve as executive producers alongside co-showrunners Kevin and Dan Hageman. Ben Hibon directs, co-executive produces and serves as the creative lead of the all-new animated series. Aaron Baiers also serves as co-executive producer. Claudia Spinelli is Nickelodeon’s Head of Animation Development with Kelley Gardner serving as Executive in Charge of production on the series for Nickelodeon. Stephanie Groves is the Executive Vice President of Streaming and Cable Series for CBS Studios overseeing the series. Distributed by ViacomCBS Global Distribution Group, Star Trek: Prodigy debuts on Paramount+ in the US on 28th October with a one-hour premiere episode and will also be available to stream on Paramount+ in international territories, including Latin America, the Nordics and Australia.

On October 10, MIPCOM and CANNESERIES also presented the world premiere screening of Around the World in 80 Days, the well-loved story of the race around the world of Englishman Phileas Fogg. The series is co-produced by the European Alliance formed by France Télévisions, ZDF and RAI, with additional co-production partners, Peu Communications in South Africa, Masterpiece PBS in the USA, Seven West Media in Australia, Be-FILMS and RTBF in Belgium and Daro Films.

MirrorWater founder and series creator Christina Rose will debut the episode titled A Woman’s New World about female orchestra conductor Tianyi Lu. The screening will be followed by a cocktail reception. (rsvp to: christina@mirrorwaterentertainment.com)

Wonder Women (6×50) is about young women making a major impact serving in leadership positions in underrepresented industries. We are defining underrepresented where 15% or less of a given profession has women in key positions. We are featuring a fisher woman out of Alaska (Marie Rose), an astronaut trainee from Germany (Suzanna Randall), a race car driver from Hungary (Vivien Keszthelyi), a Puerto Rican Baseball player (Diamilette Quiles Alicea), a musical conductor from China/New Zealand (Tianyi Lu) and a Boing 777 pilot from India (Anny Divya). Each episode focuses on one of the women — their journey, their hardships, their impact and what they hope to achieve for future generations.

MIPCOM, which runs from October 11-14, 2021 in person and online, features a robust program of premieres, panels and special events.