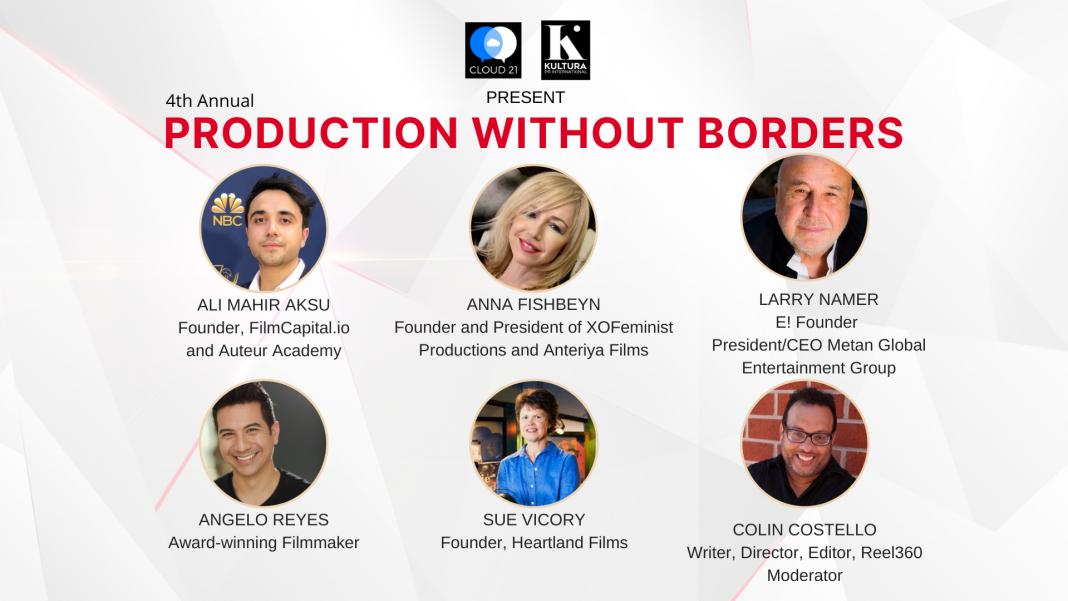 Cloud 21 International (www.cloud21.com) and Kultura PR International (www.kulturapr.com) are pleased to present the fourth annual “Production Without Borders” special event that will be held during the 2021 virtual American Film Market.

The fourth annual “Production Without Borders” event will feature a panel of some of the top names and rising stars of the worldwide entertainment industry, including:

Ali Mahir Aksu is an international film producer, director and entrepreneur. He is the executive producer of several groundbreaking projects, including the first-ever Hollywood feature film to cast digital media talent, that was distributed by Universal Studios.

He is the founder of FilmCapital.io, a community focused Hollywood crowdfunding platform that was incubated at Singularity University, and Auteur Academy, an educational platform to empower independent filmmakers.

Mr. Aksu is the Southern California Young Professionals Ambassador at the United Nations Association of America. He is an MBA candidate at Chicago Booth School of Business. He holds a B.A. in economics, with a minor in film, TV and digital media from UCLA, and earned executive-level degrees from MIT, Wharton and Singularity University.

Anna Fishbeyn, Founder and President of XOFeminist Productions and Anteriya Films (Russia/USA), is an award-winning star of stage and screen, a filmmaker, director, author and actress.

Her movie Galaxy 360: A Woman’s Playground, which she wrote, directed and stars in, will have its red carpet, world premiere during AFM 2021. The pre-release version of the film screened to a packed house at the Cannes and Big Apple film festivals and was a finalist of the Sundance New Frontier Exhibition.

Ms. Fishbeyn’s first play Sex in Mommyville premiered in New York City and was recommended by Bloomberg News, while CBS Radio pronounced her “a comic genius.” Her second play My Stubborn Tongue played off-Broadway at NYC’s New Ohio Theatre and went on tour to the West End in London at the Soho Theatre. Her solo cabaret show at the Metropolitan Room in NYC Anna on Fire and Uncensored was recommended by CBS News New York, Jewish Week, and NiteLife NYC.Ms. Fishbeyn wrote and starred in the award-winning web series Happy Hour Feminism and directed and starred in Invisible Alice, a short musical film is currently on the festival circuit. Pre-production has begun on her next movie How To Seduce Your Dinner Guest, as well as two optioned pilots for television, the comedy Healthy Nuts and the drama Infidelity Club.

Larry Namer – An entertainment industry veteran with close to 50 years professional experience in cable television, live events and new media, Larry Namer is a founding partner of Metan Global Entertainment Group (MGEG), a venture created to develop and distribute entertainment content and media specifically for Chinese speaking audiences in China and abroad. In 2018, the company launched the MGEG Film Fund I and serves as managing partner. He is also the executive producer of the feature film “EMPRESS,” a new travel series for the China audience titled “Explore The World,” and an executive producer of the crime drama “Nova Vita.” He recently served as an Advisor and Chief Operating Officer of FanVestor and is a co-founder of the new lifestyle platform BeautyKween.

Mr. Namer is the co-founder of E! Entertainment Television, a company now valued at over four billion USD, and the creator of several successful companies in the United States and overseas. Among those companies are Comspan Communications that pioneered Western forms of entertainment in the former Soviet Union and Steeplechase Media that served as the primary consultant to Microsoft’s MiTV.

Early on, he was named the youngest general manager of a major cable system at Valley Cable TV (VCTV) in Los Angeles. His vision and direction garnered VCTV several Emmy and Cable ACE award nominations, as well as recognition by Forbes magazine as the national model for local cable television programming. In 1989, he was awarded the prestigious President’s Award from the National Cable Television Association.

Filipino/Italian American, Angelo Reyes began his professional life as a creative designer in the advertising industry. Later, he decided to explore the television industry by hosting and co-producing the motorsports show Street Vision Garage.

He then studied with Lynette Sheldon at the LS Acting Studio in New York and soon relocated to Los Angeles to pursue his aspirations as an actor. He has appeared in the 2020 Netflix film Hill Billy Elegy, the 2010 comedy-crime-drama The Bill Collector, HBO’s The Outsider, the 2013 drama-thriller Killing Kennedy, and others.

After achieving success in the acting realm, he decided to explore his talent as a director. In 2015, he produced his first short film titled Heartless. In 2018, he was recognized with the Rising Star Award at Westfield International Film Festival for Groomed, a short about human trafficking that he both produced and directed.

His latest project, 21st & Colonial is based on a true story about a young Black man struggling to support his family crosses paths with an overworked police officer with PTSD. The short, which he co-wrote, directed, and stars in, won a REMI Award at the 54th Worldfest International Film Festival and has been named an official selection at several festivals. Mr. Reyes plans to develop the story into a feature film.

Deeply in touch with his Filipino and Italian roots, Reyes is dedicated to creating films that explore the intricacies of different cultures and promote tolerance, diversity and inclusion.

Three-time Telly Award-winning filmmaker Sue Vicory has been creating community-based films and projects within her not-for-profit production company Heartland Films, Inc. since 2003. Her works include Homelessness & the Power of One, feature documentaries One and Kansas City Jazz & Blues; Past, Present & Future and short films Absent and 1898, The W.F. Norman Story. In 2015, she founded Team XX, an all-female team of 25 filmmakers that created the award-winning film Down Stage.

She is a member of the Los Angeles-based Alliance of Women Directors and creator of the Website www.womendocumentaryfilmmakers.com, designed to increase visibility for female filmmakers. She is the creator of the non-profit brand My Power of One (MPO1). In 2015 under the MPO1 banner, she filmed a 48-state tour completing 12 Acts of Kindness. Sue and a team of 50 created the film Panic at Park which aired on KOCT and KPBS during the San Diego Film awards. She is currently premiering a historical documentary titled Original Jayhawker.

Ms. Vicory was named the 2020 recipient of the French Riviera Film Festival’s annual Industry Excellence Award. She was awarded a Lifetime Achievement award from Washburn University, her alma mater.

The panel will be moderated by WGA-East member Colin Costello, a biracial genre, comedy and horror writer and director. The former award-winning advertising creative director, has written two family feature films. 2013’s, The Stream which stands at 93% on Rotten Tomatoes.

His debut short film, that he wrote and directed, 2018’s The After Party has played in 25 festivals and won five. His other short film, 2019’s Dreamwisher has won ten awards in the United States and internationally.

After writing two episodes for the PBSKids series, Moochie Kalala Detective’s Club, the educational show was nominated for a Midwest Emmy award. Colin most recently finished a comedy web series From Russia with Motive, which has won several awards on the festival circuit.

In late 2018, he was selected by The Champions’ Program supported by the WGA Committee of Black Writers and designed to obtain writers of color representation or staffed. It was based on his one-hour pilot Bad Cook about a Las Vegas sous chef and her rise to becoming a crime boss.

Born and raised in Philadelphia and a resident of Chicago, Colin is currently editor for industry news outlet, Reel 360 News, a screenwriting instructor at UCLA Extension and a volunteer for Young Storytellers.

SEEfest 2019 Celebrates ‘Cinema of Audacity’ and the Cultural Diversity of...