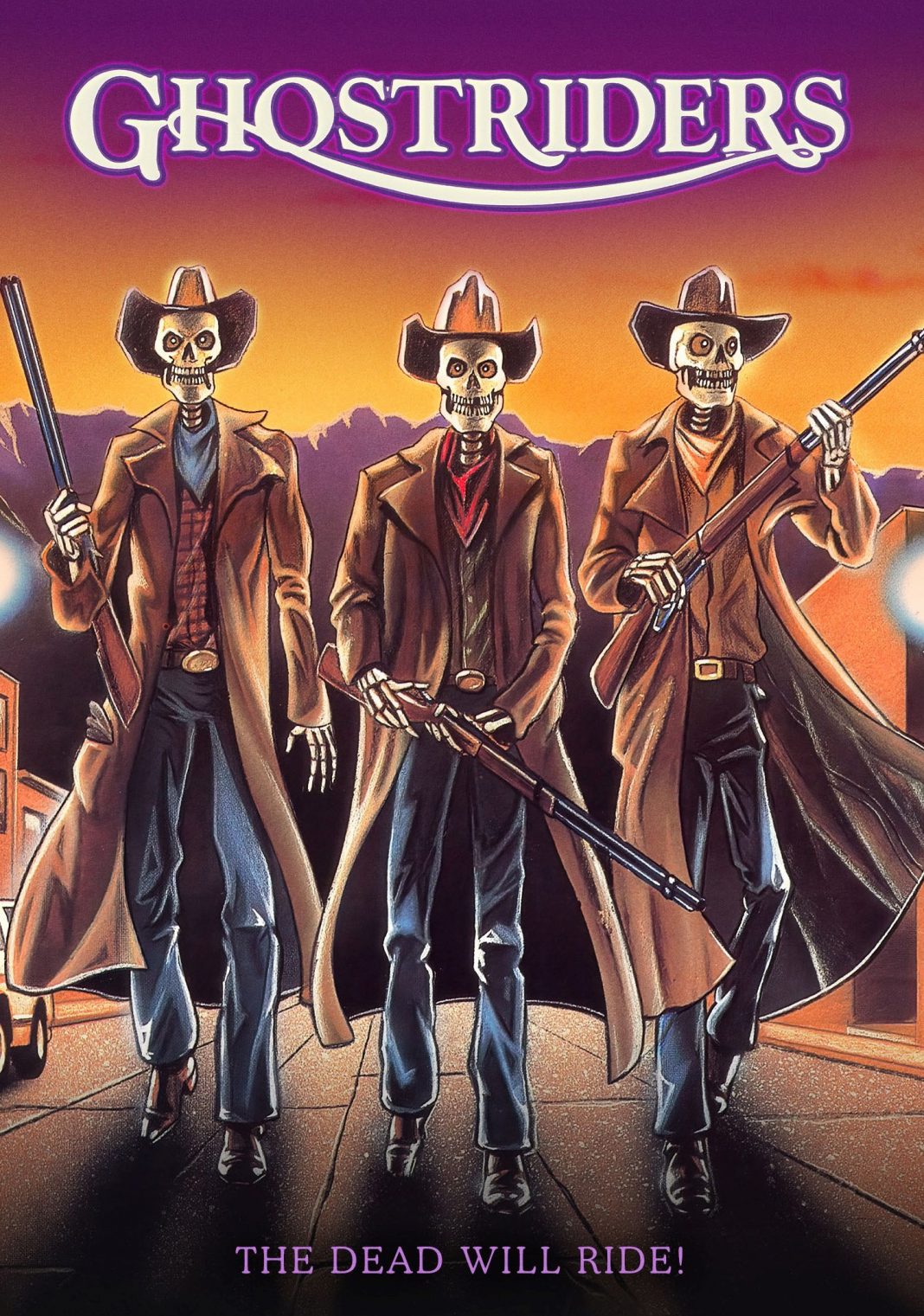 Newly Remastered HD Version of Cult ‘Western-Horror’ Classic to Launch on Blu-ray and DVD on February 8, 2022

Nothing says 1980s like Walkmans, mullets, legwarmers…and of course, campy horror movies. Verdugo Entertainment, the company that recently released the 1989 action flick Action USA, once again pays homage to this nostalgic era with the launch of the 1987 cult western-horror classic Ghostriders
on Tuesday, February 8, 2022.

The film is newly remastered in HD and available on DVD and the Blu-ray is available for pre-sale through Amazon.com, Target.com and Walmart.com. The film will be available on streaming platforms Amazon Prime, I-Tunes, and Google Play beginning in April.

Ghostriders was directed by Alan Stewart, also known for his work on Planes (2013) and Ghetto Blaster (1989). The film’s screenplay was co-written by James Desmarais (Action U.S.A) and Clay McBride.  The film stars Bill Shaw and Jim Peters.

The film begins in year 1888. As the hangman’s noose tightens around his neck, Frank Clements, the most feared outlaw in the West, uses his last breath to invoke a generational curse on the town preacher and his descendants. 100 years later, Frank and his gang return from hell to seek their vengeance. Hampton, the great-grandson of the preacher, along with his friends Corey and Pam, all find themselves defenseless against these blood-thirsty phantom cowboys, who are impervious to weapons and seemingly cannot be stopped!

“1980s low-budget films, especially horror, had their own in-your-face style.  They weren’t particularly pretty or subtle, but they delivered a fun unique experience more like a drive-in movie in your home,” comments Steve Latshaw, Post Producer, Verdugo Entertainment. “Our newly remastered HD version of Ghostriders really breathes new life into a film that represents all that is indicative of 80s camp horror. From the look of the film, which we were lucky enough to have the original cinematographer oversee, to the storyline, it’s all things that collectors and fans of the genre will appreciate.”

Tom Callaway, the film’s original cinematographer, consulted on the new release HD remaster providing a unique opportunity to enhance certain scenes with today’s tools.  The result is a truly unique collector’s version of Ghostriders that reflects the artists’ collective vision, then and now.

Bonus features available only on Blu-ray include:

• New original documentary Bringing Out the Ghosts: The Making of Ghostriders

• Vintage documentary Low Budget Films: On the Set of Ghostriders

About Verdugo Entertainment – Verdugo Entertainment is a leading independent entertainment distribution company dedicated to rediscovering, restoring and distributing cult classic and retro films. Located in Burbank, California, the company provides complete film-distribution services and the highest level of technical quality in restoration so that each film is presented in its intended brilliance – bringing today’s fans closer than ever to the original experience. Verdugo films are made widely available through streaming services, VOD, OTT, Broadcast, on VHS collectors sets, on DVD and Blu-ray, and can be seen at outdoor screenings, cinemas and festivals across the U.S. and Canada.