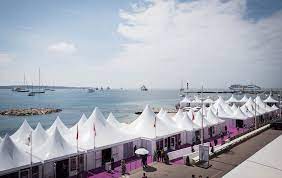 The Pavilion traditionally represents Russia at both the festival and the Marché du Film market and is the main information center for promoting Russian cinema on an international scale. During the festival, the Pavilion (located at 131, International Village) will host special receptions, panels, press conferences and media interviews throughout the duration of the festival, and its patio that overlooks the sea, serves as a key meeting spot.   (Kultura PR International founder Nicole Muj and Cloud 21 International founder Gotham Chandna hold their annual Global Entertainment Showcase at the pavilion most years.)

This year, Russia is represented by two films in the festival’s official program, as well as two in the Un Certain Regard category. Russian projects are also listed in the L’Atelier section in the CineFoundation program, for La Semaine de la Critique and the Cannes XR competition at the market.

Franco-Belgian wartime drama Mon Legionnaire, starring Russian actor Alexandr Kuznetsov is part of the prestigious Directors Fortnight (The film also stars French actress Camille Cottin (Call My Agent!)), while Where is Anna Frank?, produced by Alexander Rodnyansky and directed by Israeli director Ari Folman, will be shown as part of the Out-of-Competition program.

Olga Lubimova, Minister of Culture of Russia comments, “Russian presence at the famous festival in Cannes will be profound; national projects can be found at different sections of the official program of the Festival. Russian presence at the Marché du Film market at the virtual ROSKINO stand is also truly remarkable. This platform will become the main site of cooperation between industry representatives and international partners. This is all very important for worldwide promotion and creating cultural and business ties on the international level.”

Russian film companies will be also be united online with the ROSKINO RUSSIAN CONTENT WORLDWIDE platform, a virtual booth this year will become the main hub for promoting Russian cinema within the international market.

Evgenia Markova, CEO, ROSKINO adds, “If earlier Russian presence at Cannes was defined by a few artists, this year we see a new wave of creators representing our film industry in a range of different formats: from full-length films to animation series made with innovative VR-technology. Russian participation at the Cannes Film Festival and the Marché du Film market this year has a special meaning and importance. That’s why ROSKINO and the Ministry of Culture put much effort into helping the most diverse projects be present at Cannes.”