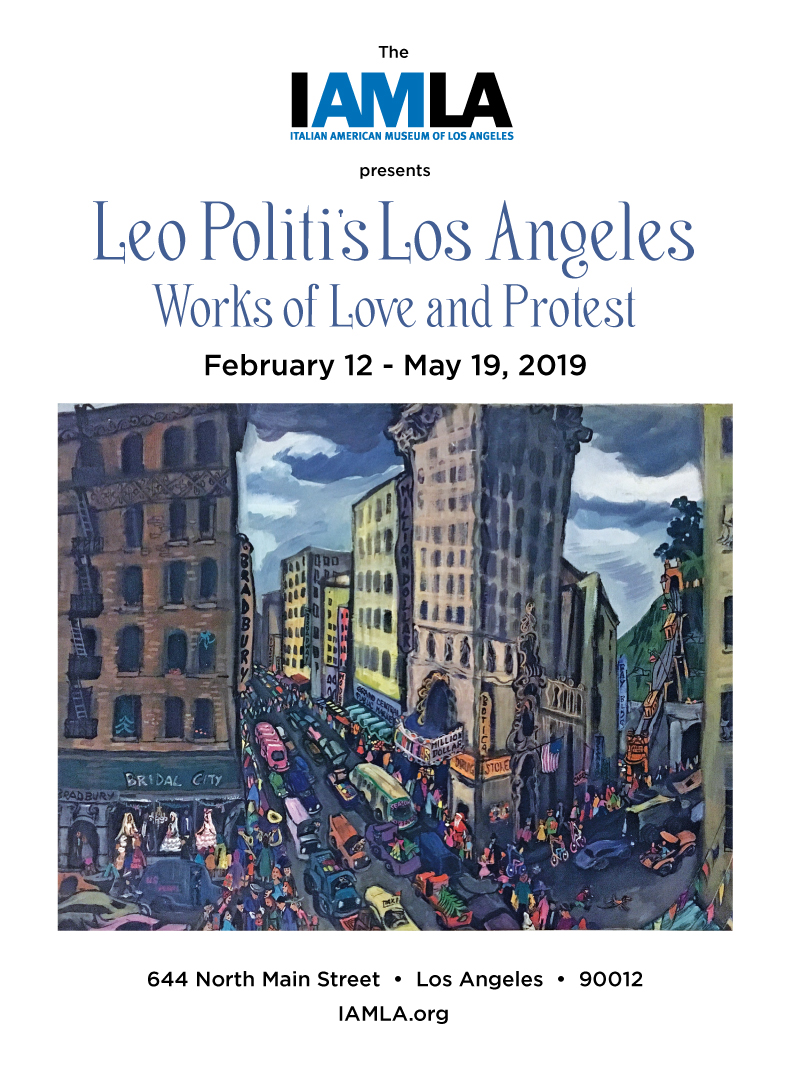 The Italian American Museum of Los Angeles (IAMLA) recently unveiled a new exhibit titled Leo Politi’s Los Angeles: Works of Love and Protest. Best known for his soothing watercolors of children and families, Leo Politi (1908-1996) was a beloved Italian-American artist and Caldecott Award-winning author. For most of his artistic career, Politi used Los Angeles as his inspiration and muse. This exhibition explores an overlooked aspect of the artist’s career, his passion for Los Angeles history and his love for the city’s diverse cultures and neighborhoods.

Politi’s work proves truly avant garde in that it predated the multicultural movement by decades. During a time when many historic neighborhoods were being erased or transformed, Politi was an advocate of preservation. He captured Los Angeles enclaves, landmarks and communities in his art and writing, suspending them in time. As an artist, Politi challenged the concept of progress built on the destruction of the past, a topic still relevant in contemporary LA.

Through a series of rarely exhibited works spanning sixty years, Leo Politi’s Los Angeles: Works of Love and Protest transports audiences to a bygone era, from Watts in the late 1960s to San Pedro during the apex of the fishing industry, along with forever altered places, including the forgotten neighborhood of Bunker Hill and World War II-era downtown Los Angeles. The exhibit will run through May 19, 2019.

Leo Politi was born Atiglio Leoni Politi in Fresno, California, the son of Italian immigrant parents. At the age of seven, Politi returned with his family to Italy where his love for drawing blossomed. When Politi was a teenager, the family relocated to London. Enchanted by the city’s cosmopolitan lifestyle, Politi explored London’s museums and studied the works of Van Gogh, Cézanne, Monet, and Rembrandt, among other masters. He received a scholarship to attend the National Art Institute in Italy and, after completing his education, decided to move to California. Traveling by boat, Politi became acquainted with Latin American society and grew enamored of the Mayan culture. The rich earth tone hues became his palette throughout the 1930s and 1940s. After arriving in Los Angeles, Politi worked as an artist on Olvera Street, sketching and painting tourists and selling his work. Politi began illustrating magazines and books and ultimately became a children’s author. As World War II approached, Politi used his signature characters, Pancho, Lupita, and Pedro to convey pacifist messages. Walt Disney offered to purchase the rights for Pedro’s character, but Politi refused as he would not compromise his artistic integrity. Politi authored thirty books, including Moy Moy, Pedro, The Angel of Olvera Street and Song of the Swallows. ty. Polit