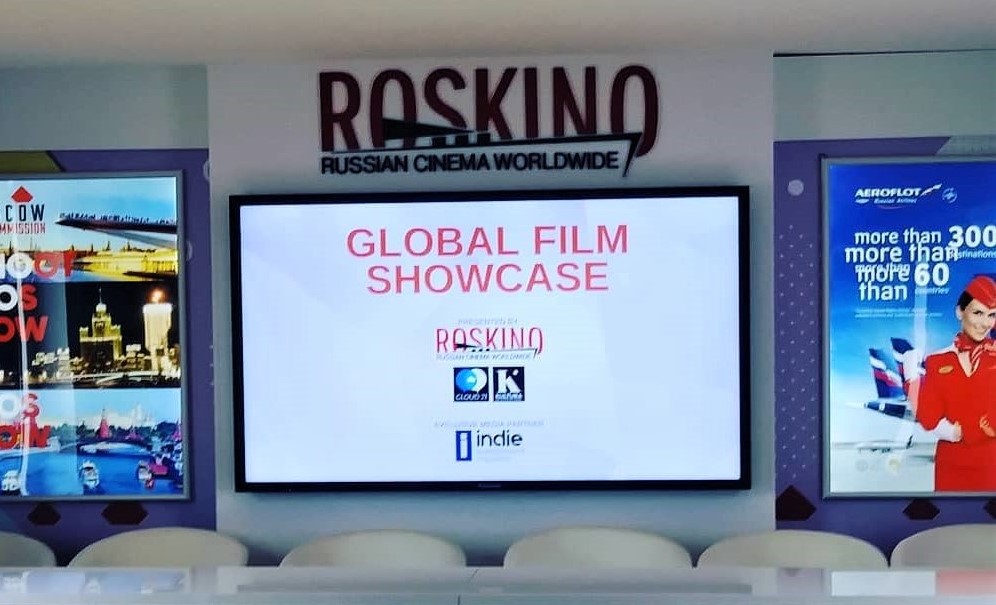 ROSKINO, in conjunction with Cloud21 International and Kultura PR International, is pleased to present the “Global Film Showcase”  that will be held during the Cannes Film Festival and Marché du Film on May 20, 2019 at 2 p.m. at The Russian Pavilion in the International Village.

The by-invitation only event will host a special panel featuring ROSKINO CEO Katya Mtsitouridze.  Leading ROSKINO since 2011, Ms. Mtsitouridze is one of the most accomplished executives in the global film industry today. She is the creator of the television series “This Is Cinema” and film expert for Russia’s Channel One, and previously served as Variety Russia’s editor-in-chief.

In 2017, in conjunction with the City of Moscow, Ms. Mtsitouridze initiated the Moscow Film Commission, an institution created to promote the city as a unique shooting location and to provide assistance to international film and TV production companies wishing to shoot there. In 2008, she founded the Russian Pavilion at the Cannes Film Festival, which she heads to this day, and in 2014 she created and produced the first edition of the Saint Petersburg International Media Forum.

“Last year’s Global Film Showcase was a huge success,” comments Ms. Mtsitouridze. “We are delighted to invite filmmakers and industry executives from around the globe to engage once again in a lively discussion on the international stage at Cannes.”

Allison Melody, Melody Productions | Twice named an “Icon of Influence,” Allison Melody is an eco-entrepreneur with a passion for film, fitness and food. Her endeavors include filmmaking, podcast-hosting and motivational speaking. She hosts the top-ranked Food Heals Podcast, owns the film production company, Melody Productions and speaks at events across the US and Europe.

For the past twelve years, Melody has also directed and produced documentary films, PSAs, commercials and viral videos on the topics of social justice, human rights and public health. She is currently directing Food Heals, a documentary that chronicles the journey of inspiring individuals who have used nutrition and alternative medicine to heal themselves of chronic, degenerative and terminal disease. She is frequently invited to speak at top events and conferences.

Jamie Lundy, Director/Executive Producer, Principle Deception |Jamie Lundy is a British film producer, director, cinematographer and writer. In his professional career, he has worked and excelled in many different industries, from fashion to engineering. In his early years, he was a successful international model working with the top names of the fashion world, including Kate Moss, Mario Testino, Bruce Weber, Versace, D&G, and more.

After graduating with a mechatronics degree from Manchester University, Lundy went on to become an award-winning designer, project manager and director for a multi-million pound organization, working within the Engineering and Railway Network. In 2009, he was awarded the national “Outstanding Individual Project Award” by Network Rail.

In recent years, Lundy has turned his professional career back towards the creative realm, mastering photography and lighting and becoming a professional photographer. He is now the CEO of a premium global menswear brand 7L. Always having a keen eye for making movies and drawing from his past successes and professional skills, Lundy’s creative direction is now firmly targeted to directing, producing and investing with his production company Full Circle. Lundy’s current film projects include the World War II drama “Principle Deception” and horror/thriller “Evie.”

Dena Rassam, Executive Producer, “Tattoo” | Dena Rassam is the daughter of renowned Iranian director/producer Masoud Rassam.  The actress turned producer played in many commercials and TV series in her youth. She was educated in Auckland, New Zealand as an international student at age 13, attending Marrist College, and received a diploma from the Foundation of Business. She also studied business at Auckland University, but her studies were cut short due to a family emergency.

In 2018, Rassam directed and produced her first short film titled “Zan.”  The next film she produced titled “Tattoo” won the 2019 Berlinale Crystal Bear for short film. The film recounts a true event that happened in her own life. With the film, she wanted to spotlight the pressure experienced by young people in her culture, and how they are often not treated or respected.

Film producer and international journalist Eileen Tasca will moderate the hour long panel. Eileen Tasca is managing director of Alien Films and Task Films, a production whose co-shareholder is legendary Polish film director, Jerzy Skolimowski. In 2015, Ms. Tasca was executive producer of  Skolimowski’s “11 Minutes” that premiered at the 2015 Venice Film Festival. The film won top prize at the Lisbon Film Festival and was selected as Poland’s entry for foreign language film for the 2016 Academy Awards. In 2010, she co-financed “Essential Killing,” also directed by  Skolimowski, that garnered numerous awards at the Venice Film Festival. Previously, she worked in venture capital at Citi Corporation and as a journalist for Variety and several other trade publications.  Tasca is currently collaborating with renowned filmmaker Dario Argento to develop a feature film and TV series.

Following the panel will be a VIP reception where media and industry executives will have the chance to meet and mingle with the panelists.

Sponsors include Bodvar House of Rosés, The Good Gin, GOTHAMOLOGY, My Power Of One, Naturalina, French Riviera Film Festival and YUZZL.

ROSKINO, formerly SOVEXPORTFILM, is the Russian establishment responsible for consulting with the Russian Government regarding the international image of the Russian film industry and is the only company promoting the country’s motion-picture art internationally. Founded as a film production and distribution company in 1924 under the name SOVKINO, the company reformed as SOVEXPORTFILM, an import and export film company in 1945. From 2012, the company has been rebranded as ROSKINO, a state funded body responsible for promoting Russian films and filmmakers internationally.