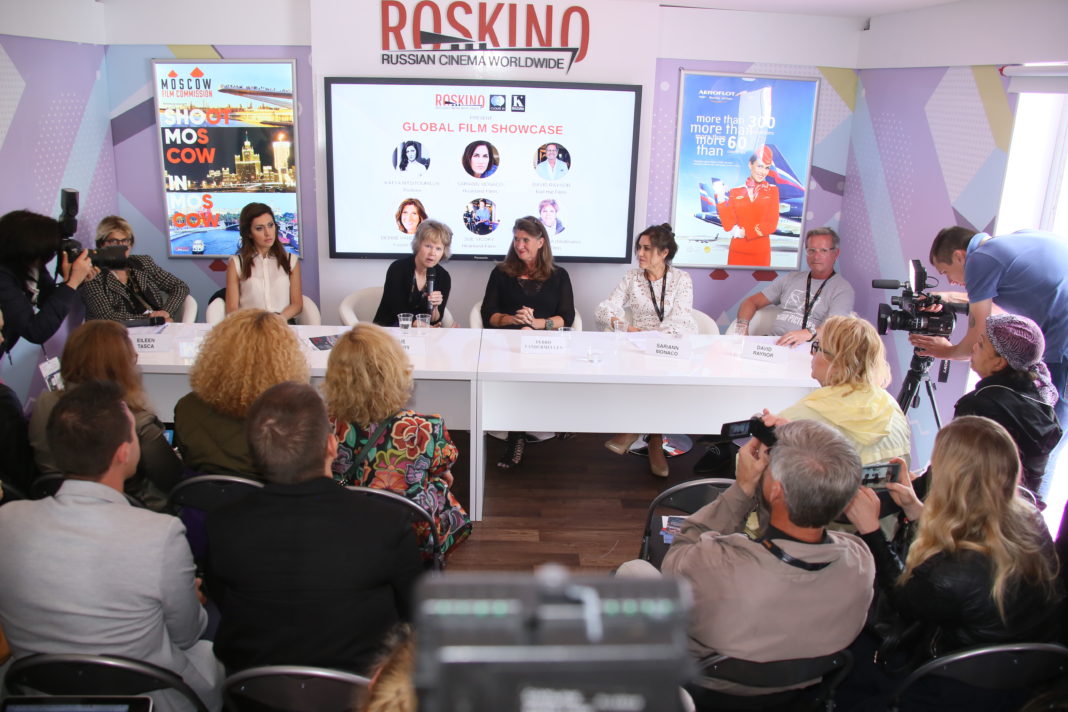 The by-invitation only event hosted a panel featuring ROSKINO CEO Katya Mtsitouridze. Leading ROSKINO since 2011, Ms. Mtsitouridze is one of the most accomplished executives in the global film industry today. She is the creator of the television program “This Is Cinema” and film expert for Russia’s Channel One, and previously served as Variety Russia’s editor-in-chief.

In 2017, in conjunction with the City of Moscow, Ms. Mtsitouridze initiated the Moscow Film Commission, an institution created to promote the city as a unique shooting location and to provide assistance to international film and TV production companies wishing to shoot there. In 2008, she founded the Russian Pavilion at the Cannes Film Festival, which she heads to this day, and in 2014 she created and produced the first edition of the Saint Petersburg International Media Forum.

A showreel of the speakers’ companies and clips of internationally successful Russian and Soviet films were screened as introduction.

Debbie Vandermeulen opened the discussion by sharing her views on successful investment strategies in film. She illustrated two British financial mechanisms that provide tax advantages for the investors: the Seed Enterprise Investment Scheme, or SEIS, that allows filmmakers to raise up to $200,000 and results in up to 50% of tax relief for the investor, and the EIS (Enterprise Investment scheme) that allows to raise up to $5 mln from up to three investors each getting a 30% tax relief. Eligible projects must be produced by British tax residents with both production and post-production taking place in the UK. Both SEIS and EIS are applicable for TV and other creative projects as well as merchandising. She also touched upon the increasing interest in international projects and documentaries of the US audiences that is proved by Netflix acquisition strategies.

Sue Vicory shared her experiences of working on documentary projects. The director spent three years touring the various states for her Homelessness & the Power of One project. She believes documentaries have more opportunities and openings today owing to streaming platform and Vicory places a special emphasis on supporting women working in the industry. She thinks documentary films are an important area for female directors. Sariann Monaco joined in to tell about her precious experience of making Absent with Ms. Vicory.

Ms. Mtsitouridze took up the female rights discussion to shed some lights on the state of affairs in the Russian film industry.

‘’Unfortunately Russia is hardly among the world leaders in female empowerment but we are working to get things gradually changing. Women hold some of the topmost positions in our government and banking system. For instance, our Federation Council, the supreme chamber of Parliament, is chaired by Valentina Matviyenko, a unique personality. However we are still behind the US and many other countries. A shift took place last year when several leading female journalists accused a powerful member of parliament of sexual harassment and got wide support. And yet Russian women were among the last ones to join the #metoo movement. My own Hollywood Reporter interview received mixed reactions and even people I relied on were frustrated by the fact that a taboo issue has been raised in Russia. On the other hand, I got calls from men I considered rather conservative and offered their support. I think it is wonderful how bravely this subject is discussed around the globe owing to The New York Times and the New Yorker journalists. Many large and developed countries have achieved a lot as far as female rights and human rights in general are concerned by in less economically stable regions neither women nor men can be sure of their safety. But I believe that open dialogue can encourage them as well, which is the main goal of the whole movement. This is why the filmmakers of the world unite, fully supported by the Cannes festival. We stand together and we stand strong.”

Ms. Tasca was interested in Ms. Mtsitouridze’s views on streaming platforms in the light of her vast experience in global promotion of Russian films. The Roskino CEO said that personally she believed in both cinematic and VOD perspectives.

Ms. Tasca commented, “Watching a movie in a dark hall with other people is a unique experience that creates a special connection. We must uphold both distribution strategies and keep them balanced.”

The only man present, the Australian born David Raynor dwelt on a socially relevant issue he has been treating in his films, namely teenage suicides.

He explained, “Last year 3000 Australians committed suicide, and 35 of them were teenagers. This is a lot for a country with a population of 25 million. It is a serious problem that has to be addressed publicly, in films, in the education system, and at home.’’

Answering the journalists’ questions the panel speakers touched upon many other globally relevant issues, such as sports and moral dilemmas, but in the end they all agreed that the key prerequisite to a movie is the author’s involvement.

Ms. Tasca added, “It was my goal with the panel was to highlight diversity and unity within our creative community during such a turbulent time in the world. We must come together and continue the conversation and dialogue between countries and I think we accomplished this with our event.

Following the event was a VIP reception with attendees including filmmaker Ella Manzheeva and actress Maria Shalaeva.