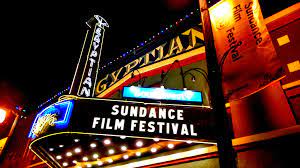 IEM’s Rachael Fisher reviews some of the featured shorts from the Sundance 2022 competition.

Zara, a teenage girl, shares a sensual dance video with her virtual boyfriend, who begins to blackmail her into meeting him in person. Will Zara give in to this stranger’s increasing demands or will she set herself free?

Director Seemab Gul does not shy away from revealing the cultural struggle to abide by assigned gender roles and the limitations in “Sandstorm (Mulaqat),” Sundance’s first Pakistani narrative short film. When Zara (Parizae Fatima), a young schoolgirl sends a boy online a sensual video of herself dancing, he threatens to blackmail her if she does not show up to meet him in person.

The short conveys the importance of a girl’s honor in Pakistan through the pressing dialogue to the notable way young girls must wear their chador. Zara (Parizae Fatima)’s struggle to conform with this way of tradition and modesty is depicted not only through her motivations and decisions, but through the simplicity of the visuals.

The silhouettes of Zara throughout the film give the audience insight into her internal struggle and how she is viewed by her community. To her virtual boyfriend, she wishes to be seen as a woman. To her parents, teachers, and friends, she is still only a child. However, when her boyfriend labels her as “sexy,” Zara worries about her decision to break away from the expectations of traditional culture.

In the last scene, the sandstorm, everything Zara has built up to has arrived yet she silently takes a stand in her decision to walk away. This is powerful in itself as we are left on the edge of our seats as she teeters back and forth between the choice that could tarnish her reputation.

Shark tells the continuing adventures of Jack, who loves to prank — but in his latest relationship, he may have finally met his match.

“Shark” is the completion of a three part series about Jack, a jokable prankster (Nash Edgerton), who finally meets his match (Rose Byrne).

“Shark” follows a simple storyline that keeps viewers on their toes wondering at which moment the prank that keeps everyone fooled may not be a joke.  From the teetering hand-held shots to the actor’s performances, we are taken through a journey of possibly dangerous situations from the opening scene of a dentist office to the harmless ‘spider on the dinner plate’ prank. Director Nash Edgerton keeps the audience waiting on the edge of their seats in anticipation for something to go wrong.

The short opens with the focus on a jarring needle at the dentist office. The camera hovers over our protagonist just enough so the tension is felt as the dentist places the needle in his gum.  Jack shrieks. The surrounding nurses jump, scattering into a panic. Until Jack rudely bursts into laughter for the success of his joyous prank.  Gags like these are depicted from a light-hearted sense with dark undertones to add an ominous factor to Jack’s actions at fault.

The film grapples with crossing the line of the innocence of pranks until the end where Sofie (Rose Byrne) may have let her sense of foolishness get the best of her. Jack, left stranded, is just the off-putting ending audiences need for the protagonist to get what we all think he deserved.

The simplicity of the comedy took a dark but expected turn in the final scenes. Director and Writer Nash Edgerton and Writer David Michôd leave us with a shallow feeling during the composition of the last scene. In which, the protagonist is left unknowing the damage of his foolishness which all pranksters eventually may face.

Kenza and her little brother Mahdi regularly humiliate each other on social media in cruel ways. As they travel by bus, Kenza puts her brother to the test: professing his feelings for Jada, the girl he loves.

“The Right Words” tackles relationships, the innocent feelings of a crush and the pressures teenagers face with appearances on social media. Mahdi (Yasser Osmani), the protagonist of the film is humiliated by his older sister who exposes a love letter written to his crush to everyone on social media.

Director Adrian Moyse Dullin is able to deeply connect to the pain points of the teenage audience through the storytelling aspects of his film. The film transitions back and forth between the point of view from the social media post itself to the happenings on the bus. The tension between the actors heightens and the composition eloquently mirrors the same. The setting of the bus creates the stakes needed for the audience to empathize with the nervousness inside Mahdi. The shadows and vignettes created by the natural illusion of the bus passing through underpasses and tunnels construct the uneasy yet natural tone for the young boy, almost putting viewers inside his mind.

Everything on social media may not be what it may seem and has the destructive power to ruin reputations as seen through this short. The relationships between the different characters keep the audience enticed in their questions of what may be the ‘right’ way to act per gender stereotypes. Several themes are cleverly explored through the central dilemma condensed into one location.

The film leaves you with a glass half full, satisfied that the protagonist achieves what he wants, but like the disadvantages of social media, his image is tainted from what the others are posting and viewers see online.