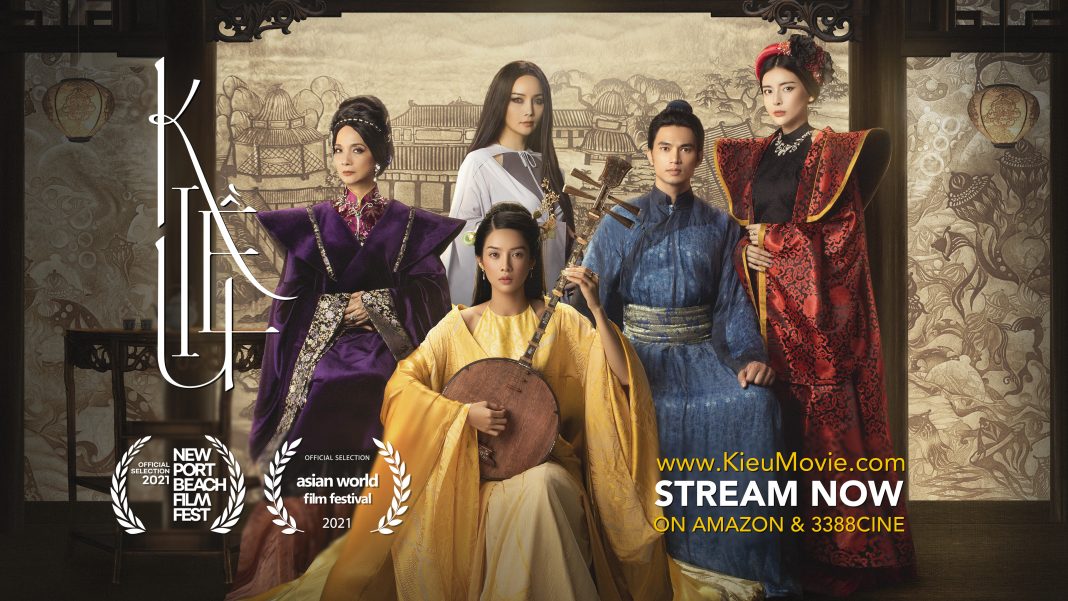 The Tale of Kiều is widely considered the most important Vietnamese literary work of all time and the poet Nguyễn Du has been recognized and honored by global organizations such as UNESCO and the World Peace Council for his literary and cultural contributions. The 2021 film Kiều was produced as an homage to the 200th anniversary of the poet’s passing.

Inspired by a selected excerpt from the epic 3,254-verse “luc bat” meter poem, the feature film Kiều takes the audience on a breathtakingly emotional journey of the eponymous heroine’s trials and tribulations after she agrees to wed a stranger to save her falsely imprisoned father and brother.  Unbeknownst to her, this marriage is a deceit to force her into sex labor at a brothel where her beauty and brilliant talents spawn cruel jealousy and unwanted obsession.

Because she is a virgin with blue blood, Kiều is considered to be marriage material and escapes the usual lot of a courtesan.  Ironically, she finds true love with another woman’s husband!  She gets by with a little help from a spirit friend who intercedes when the going gets tough.

Our heroine must decide whether to accept her fate in life or defiantly challenge it amidst her melodramatic journey through the achingly romantic landscapes of Vietnam.  Kiều both portrays the suppression of women in feudal Vietnam and points towards the possibility of human liberation.

“And hundreds of years from now will anyone cry the songs I cried?” the film plaintively asks us at the very beginning. Tragically, human sex trafficking is still one of the saddest songs being cried not just in Asia but all over the world, and stories like this one play out every day.

Kiều is directed by Mai Thu Huyền and produced by Tincom Media, with a US release by 3388 Films.  The film was made available for streaming on Amazon starting Friday, October 29th, 2021.  It should find a worldwide audience with lovers of magical realism and the martial arts.