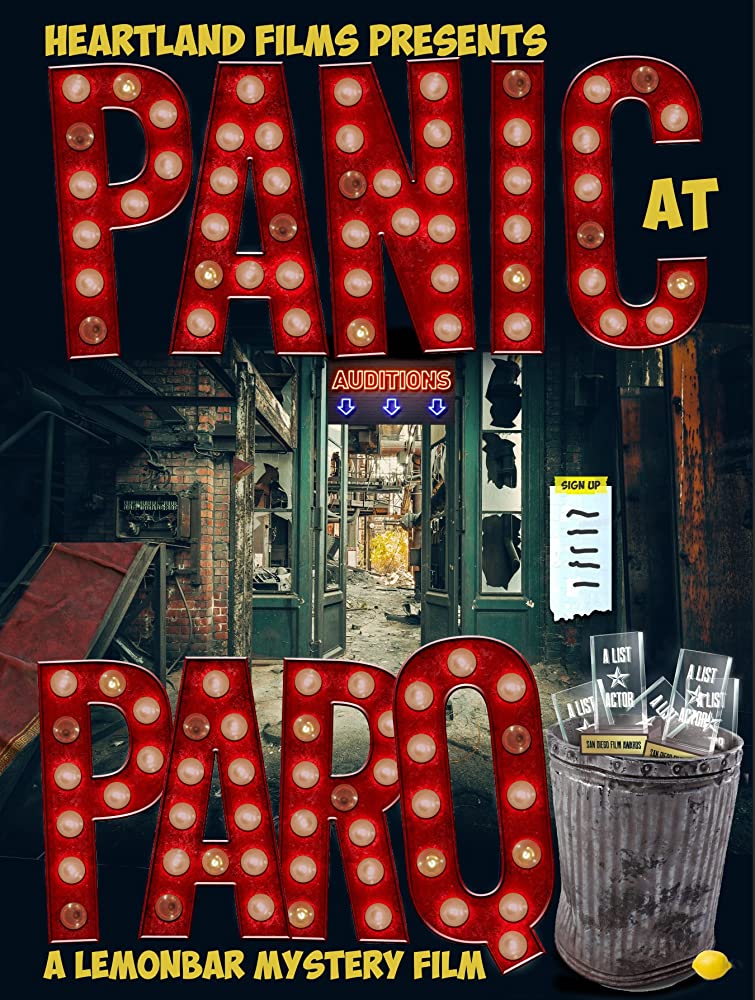 The parody short film Panic at Parq, a tribute to Jodi Cilley, founder of the Film Consortium San Diego, will have its world premiere on KOCT TV on October 21, 2020 at 6:30 p.m. PST.

The idea for the film began as a ‘Lemon Bar Meetup” social event in January 2020, over lemon bars at Milton’s Deli in Del Mar, California, which led to a “Lemon Bar Mystery Film” casting call with over 50 people, actors and crew in attendance.

In the film, when all the acts for the San Diego Film Awards suddenly become unavailable, the production team is tasked with finding replacements at the very last minute.  Fearing the wrath of the show’s head honcho, the squabbling band of producers is forced to put aside their differences long enough to secretly audition replacement acts; but when nearly every performer in San Diego responds to their casting-call, they quickly realize just how in-over-their-heads they truly are.

The film was directed by Sue Vicory and David S. Dawson of Intellexual Entertainment, and produced by Susan J. Farese of SJF Communications and Lori Morkunas Jones, along with advising producer Francine Filsinger and assistant producer Marci Krown.

“Making a film in San Diego is both a pleasure and an honor working with so many talented cast and crew. Although a parody, this film is also a love letter to Jodi Cilley, president and founder of the San Diego Film Consortium,” comments Vicory, who recently was awarded the Industry Excellence Award at the 2020 French Riviera Film Festival.

“San Diego has a talented and diverse group of filmmakers who relentlessly pursue their passion for the art form. Just before the pandemic shut down nearly the entire industry, a large sample of this creative body came together to create a loving tribute to Jodi Cilley, the founder of Film Consortium San Diego and unintentionally to themselves,” adds Dawson. “This fun little film is a delightful piece of comedy that highlights the strange beauty of artists battling deadlines, creative differences and the mind-boggling diversity of talents that creative people bring to the table.”

During the production the cast and crew completed a community-based act of kindness, giving blood at the annual Kyle Kraska Celebration of Heroes  blood drive, led by Lori Morkunas Jones.

“It was an honor organizing our film community to help with Kyle Kraska’s annual blood drive.  To know that our efforts and blood donations went to save lives is a wonderful feeling,” says Jones.

Heartland Films, Inc., a 501(c)3, was established in 2003 by director/producer Sue Vicory to create content that inspires, educates, and empowers its audience. Over the past 18 years Heartland Films has released a vast array of content that has screened in festivals worldwide and won many awards.