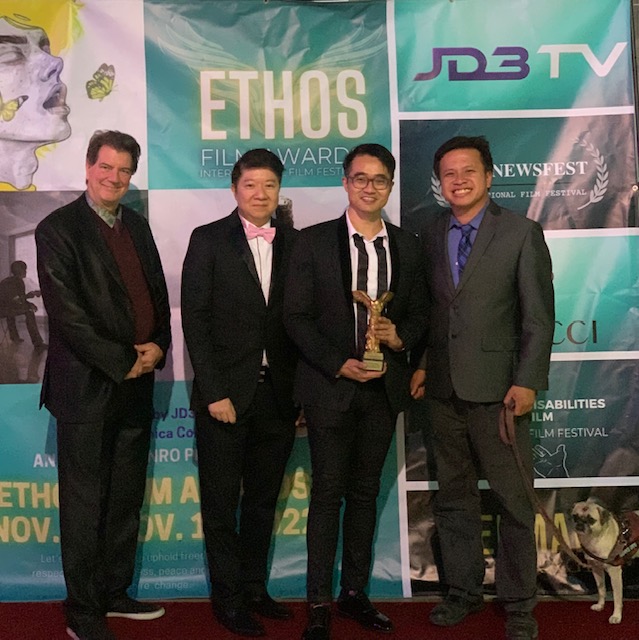 Pandemic prevented producers John Yiu and Kenny Chan from receiving a few of their 219 awards for the 2018 Malaysian production “Million Loves In Me.” Fast forward to 2022 and the producers were able to travel to Santa Monica to showcase their film among 150 others. It ended up receiving the prestigious Grand Jury award, one of the highest honors representing critical and audience consensus at the Ethos Film Festival.

While many films were showcased and awarded, “Million Loves In Me” was a clear standout, transporting the audience to an alternate world in a city in Asia, full of stylish Crazy Rich Asians type outfits, but set in a backdrop of high-density apartment living. Most importantly, “Million” takes you on a rollercoaster of emotions from pain, disgust, love, laughter, tears and ultimately empathy for the two main characters: a mother and daughter from a famous Hong Kong case of animal hoarding in an apartment, which soon became a national lawsuit and news story.

The real-life connection to the film is stronger than in most productions. Producer and actor John Yiu was the lawyer who represented the vilified mother and daughter, for two years, understanding and empathizing with the facets of hoarding, mental illness, strained parent-child relationships and ultimately, a very public lawsuit. John won that case and gave the mother and daughter a happy resolution despite a barrage of negative media vilification. Empathy was the difference maker and became a teaching moment not just for John, but the Hong Kong community and now audiences in Santa Monica’s Ethos festival.

Uniquely, John took this empathy one step further in his creative film adaptation, by playing the role of Katy, the daughter. His portrayal brought humor and charm to the role of the daughter, who transforms in her journey within the movie, an arc that allows her to find assertiveness and an opposition voice to a domineering mother as the movie progressed, spurred by tragedy.

The execution of John’s gender-bending portrayal was tasteful and focused on substance, not gimmicks. One would arrive at this conclusion: no one would be a better character to play Katy than her real-life lawyer, John Yiu, as the audience explored gender biases in Asian families, living sheltered lives, finding comfort in animals, materialism and shopping as a self soothing mechanism, obsessive compulsive disorders and animal hoarding.

The characters were all lovable down to Ruby Yap’s powerful moment as the lawyer that berates the journalist, asking poignant questions that never become contrived or sappy. This is testament to the filmmaker’s depth of life experience.

Audiences connected to the many layers of substance in the film and my organization Asian Industry B2B actually had a hand in bringing audiences locally and as far away as Orange County, who wanted to see a unique Asian flavored indie film and the exploration of the mother-daughter dynamics of Asian culture, not often spoken about.

One audience member said “I think what the movie really achieved most is a portrayal of mental illness and abuse. Usually, the abusers are the bad guys and of course, we don’t want to like the [abusive] mom, but I actually had feelings of love for her.” The producers achieved the almost impossible: creating an understanding and likability for the villain and thereby allowing us to see a more nuanced view of mental illness and abuse.

In addition, the movie explored materialism and self-soothing by the characters through extravagant shopping that escalated from handbags and purses to cats and dogs.  The subsequent events where the world came crashing down on both mother and daughter, included the daughter falling in love with a swindler. This sets off a chain of events that reveal secrets hidden in their clandestine apartments exposed by a nosy journalist who honestly believed what he was doing was right.

Dubbed a “purpose driven” film festival, “Million Loves” was featured and selectively awarded in the ETHOS FILM AWARDS. Ethos was founded by actor/filmmaker Anabelle D. Munro in Las Vegas, and had its 4th annual festival, first in Santa Monica at the renowned Laemmle Monica Film Center and their co-producing partner facility at Santa Monica College’s Public Policy Institute and Film School from Nov. 10-13.

What struck the audience the most was the flawless pacing of the movie, thanks in large part to executive producers Conroy Kanter (“Trafficked”) and Frank Mayor who were on site at the festival. They both edited down the original cut to an American edit suited to our stateside audience, mostly cutting out the court scenes and focusing more on bringing out the emotionality of the movie’s shining moments.

Asked about their next projects in an exclusive interview, John Yiu said, “I [will be an] executive producer of a psychological thriller with an English-speaking team. I cherish the opportunity to work with talented directors in this upcoming project.”  This film will involve a home invasion and I saw the excitement in John and Kenny’s eyes as they take the next step to pursue their talents further after creating a masterpiece.

Marc Ang (marc@aib2b.org) is a community organizer in Southern California and the founder of Asian. He focuses on the minority conservative experience. Marc’s book “Minority Retort” was released on November 9, 2022, through Trinity Broadcasting Network.

SXSW Spotlights the ‘Sounds From Spain’