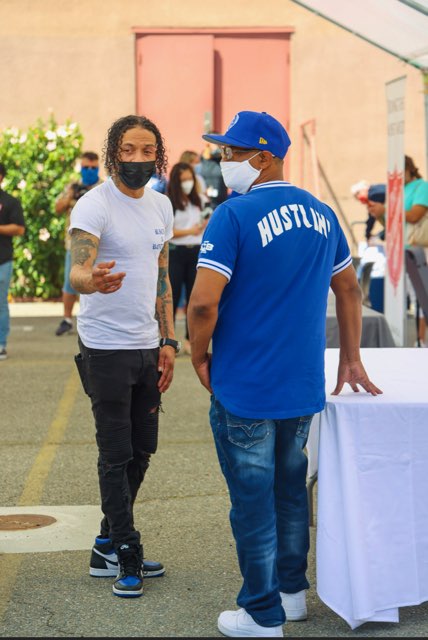 The stars came out to The Salvation Army’s Bell Shelter recently in the City of Bell to take part in the “Give Back Event” presented by H2One, the socially good hand sanitizer, and Grammy-winning music publisher Tony Mercedes.

Mercedes is the publisher for Ed Sheeran’s “Shape Of You,” TLC’s “No Scrubs,” and former manager for Tiffany Haddish.

Mercedes and H2One donated 2,000 bottles of H2One hand sanitizer to The Salvation Army, underscoring the H2One ‘One Promise,’ where for with every bottle purchased online, one is given to a community in need.

Mercedes is a 30-year music veteran and military brat who saw his father in every veteran that attended the special event. Although his father passed away over 25 years ago, his spirit lives on in his heart forever.

Mercedes commented, “Today is not about hit records or Grammys, but about honor and respect for those who wore a U.S. military uniform and fought so that I could have a future. I did the giveaway to honor my father, Army Staff Sergeant David Johnson, and personally say thank you to these brave men and women for their service.”

When Mercedes heard about H2One’s initiative, he was honored to join in a partnership with the company and other celebrities including New York Yankees’ third baseman Gio Urshela.

The event also featured music artists Chef Sean, Kylie Marshall and Elidjah Diallo. Together, the music stars came out to The Salvation Army’s Bell Shelter to hand out H2One Hand Sanitizers to the more than 300 veterans and those experiencing housing instability who currently reside there. The celebrities signed autographs, took photos and supplied The Salvation Army with hundreds of bottles of hand sanitizer.