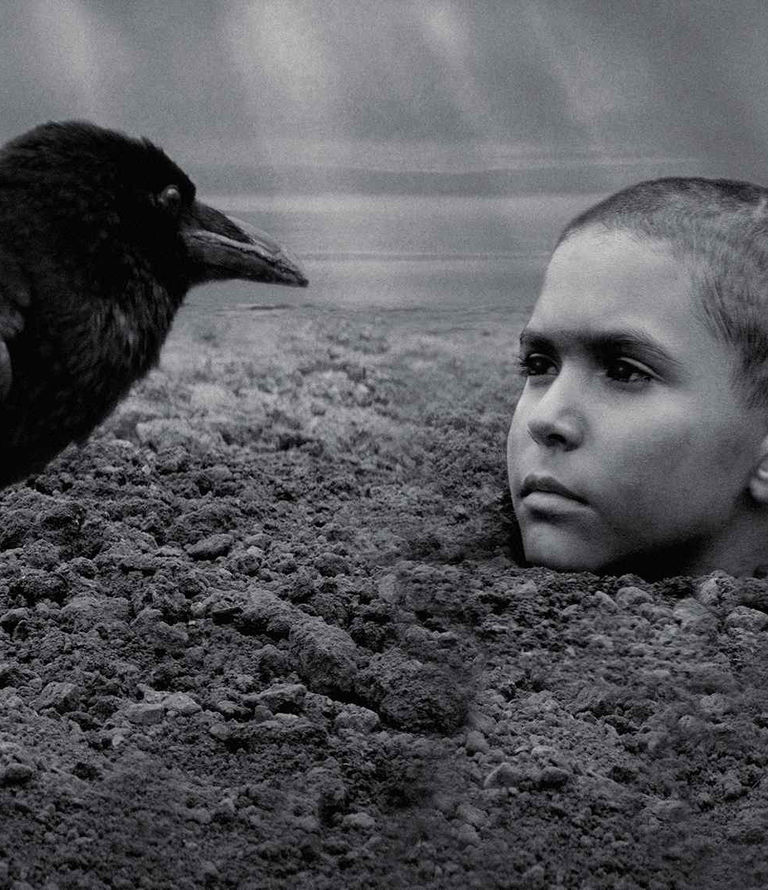 Polish-American writer Jerzy Kosinski’s 1965 novel The Painted Bird has become a global phenomenon amidst great controversy about autobiographical veracity and plagiarism.  The dark World War II tale taking place in an unspecified country in Eastern Europe is well known around the world for its graphic scenes of sex and violence that are filtered through the eyes of a young Jewish Holocaust survivor.  This boy, whose name is Joska, continues to experience untold cruelty punctuated by random acts of kindness throughout his Odyssean wanderings.

Apropos of the enigmatic title, Joska watches a bird catcher paint a captured bird several different colors and then release it to reunite with its flock.  When the flock sees the brightly painted bird, they viciously attack and kill it.  Otherness proves both beautiful and fatal.

Whatever its origins, Kosinski’s unquestionably powerful story continues to serve as a potent source of artistic inspiration.  Czech filmmaker Václav Marhoul created an internationally co-produced film version that was selected as the Czech entry for the Best International Feature Film at the 92nd Academy Awards.

Emerging nine-year-old Czech actor Petr Kotlár was cast in the starring role of Joska.  Distinguished American, British, and Swedish actors Harvey Keitel, Julian Sands, and Stellan Skarsgård also appear in the film.  Each part is titled after a character whom Joska encounters.

True to form, The Painted Bird led to mass walkouts at major film festivals in Venice, London, and Toronto.  However, it received a standing ovation at the 35th Warsaw International Film Festival after its one and only screening there.  Most viewers would rate the phantasmagoric film NC-17 and find it very hard to stomach.

“This kind of movie hasn’t been made in the Czech Republic for maybe 30 or 40 years,” claims Vaclav Marhoul.  He says it is about humanity and the importance of certain principles best illustrated when those principles are absent.

One unique aspect of the film is its language.  Though not heavy on dialogue, the film employs the artificially constructed Interslavic language that is a continuation of Old Church Slavonic.  Interslavic can facilitate communication between representatives of different Slavic nations as well as allow people who do not know any Slavic language to communicate with Slavs.

Interslavic was intended to have a neutralizing effect.  Marhoul has stated that he decided to use the language so no Slavic nation would identify with specific incidents shown in the film.

Shot in black and white (perhaps to reflect a child’s usual view of the world), The Painted Bird tells much of its story in the gray areas between the lines.  Sex can be an act of love or an act of hate.  A gun is a giver of life or a bringer of death depending upon which side of it you stand.

The film’s aesthetic of seems to turn the war-torn world on its head.  It is completely drained of color, yet all are able to speak a common language.  We are returned to a distant time before the Tower of Babel and the rise of culture and civilization in all their infinite subtlety.

Perhaps the film is meant at least in part as an allegory for our own times?  Xenophobia is on the rise again in Europe as countries struggle to absorb millions of migrants from conflict-ridden areas such as Africa and the Middle East.

Discerning critics have been able to appreciate the work on its own terms, likening it to the celebrated films of Russian director Andrei Tarkovsky.  The Hollywood Reporter chose it as one of the 20 best films shown at film festivals during Fall 2019.

The film opened in Czech cinemas in September 2019.  IFC Films became its US distributor in October 2019 and was shortlisted for the 2020 Oscars® for Best International Feature.

In summary, our species can choose to progress or merely survive.  Films like The Painted Bird show just how bleak mere survival can be.  If repulsion and dread are needed to break the dangerous spell of indifference and serve as catalysts for change–so be it.

Born in Philadelphia, Dr. Laura Wilhelm was raised in the Silicon Valley and San Diego. She attended Reed College, majoring in Russian and minoring in Classics. She studied and worked all over the world on academic scholarships and fellowships before obtaining her honors Ph.D. in Russian at the University of Kansas, and relocated to multicultural LA in 1994.

Since May 2009, Dr. Wilhelm has run the award-winning consulting company LauraWil Intercultural. She writes regular features for Indie Entertainment Magazine, The Hollywood Times, and Magic Image Hollywood Magazine and conducts research and lectures at local institutions, such as Emerson College, the University of Philosophical Research, and Woodbury University. Her work brings her into frequent contact with A-list celebrities, public figures, royals, writers, artists, directors and independent talents of all descriptions.

Dr. Wilhelm is a member of Phi Beta Kappa and Dobro Slovo, the national Slavic honor society. She was nominated for an EMMA (Exceptional Merit in Media) Award from the National Women’s Political Caucus, is listed in numerous WHO’S WHO, American Biographical Institute and International Biographical Centre publications and was a featured speaker at ABI/IBC meetings held in Washington, DC, and Vancouver, Canada.