MAG Film Studios www.magfilmstudios.com, the first Puerto Rican company for the production and distribution of films, documentaries and educational content, will officially launch on April 19, 2018.  The studio portfolio includes the films “23 hours,” “200 Letters,” “Por Amor en El Caserio” (HBO Latino), “Dos Caminos,” “Yerba Buena,” “Aventura Verde,” “Prodical Heart,” “What If We Start Again?,” as well as “The Eye of God,” currently in pre-production with a budget of $4.2 million.

“We are honored to have Jasmin Espada, an industry veteran who has guided the careers of major Hollywood stars for over 15 years, as chairperson of MAG Film Studios USA.  We are very excited about our new film and what lies ahead,” said García.

Espada leads a team in Los Angeles with offices in the heart of Hollywood and will oversee talent and script acquisitions. Espada will continue as CEO of Espada Public Relations, the entertainment PR firm she founded almost 15 years ago.

MAG Film Studios raised the funds for its annual operation in Puerto Rico through a select group of Puerto Rican private investors and co-ops. The studio will actively hire approximately 150 people per film, translating to 600 positions each year.

After four years of planning and negotiations, MAG Film Studios presents itself to the world as the largest Puerto Rican distributor allied with distribution companies Smith Global Media (SMG) that signed an exclusive agreement with Sony Pictures in 2017, and MAGNIFY.  SGM will distribute MAG products worldwide at the theatrical level, while MAGNIFY via their digital platform.

MAG Film Studios is in the process of acquiring facilities in Mayagüez, Puerto Rico for its headquarters that will become the first and largest commercial film studio in Puerto Rico. 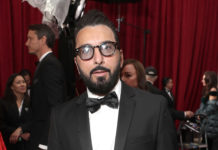 ‘The Irishman’ Star Danny A. Abeckaser Joins Cast of ‘Lansky’