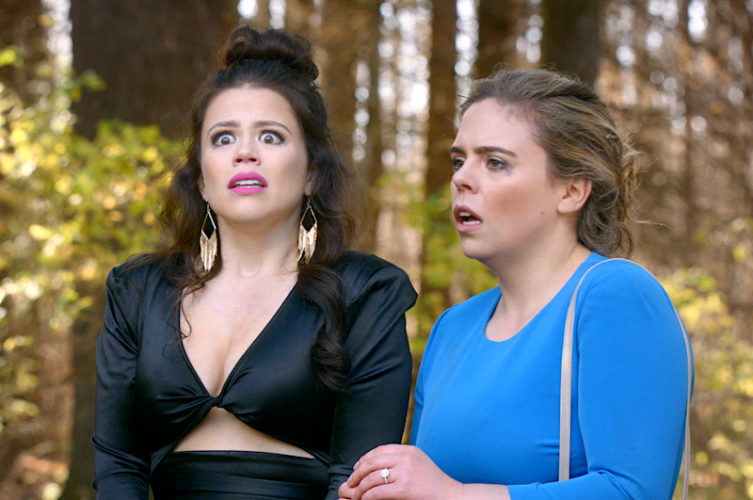 In these times, audiences are waiting to laugh, to jump, to tear up and to learn or dive into another realm to escape. These films not only transported the audience, making the chorus of laughs or shared moments of silence an event, but everyone who stepped out of that theater left feeling deeply about each one of the shorts which premiered that evening.

The screenings were not only the highlight of the night, but the interviews afterwards which revealed that most of these films and issues each filmmaker set out to tackle were actually based on a fraction of their own lives.

The Dances with Films festival kicked off this shorts sequence with a bold comedy. A film that had audience members cracking laughs and jokes along with the absurdness of the short and the situation the story put the two lovable leads in. Unbridaled opens in the woods, in the absolute middle of nowhere. We follow a snake sliding up a rock to a sleeping Catherine (Caitlin Simpson). Her screams wake her sleeping stepsister, wild child Maxie (Mischa Dani Goodman). Catherine’s sash reads’ Bride and Maxie’s “Maid of Honor.” Catherine, a girl too uptight for her own good, is going to miss her big day. From the plot twists and turns, we are invited into their relationship and the chaos that endows upon the two’s lives including this mess of a wedding. In the interview portion of the festival, director Chelsea Bryn Lockie’s inspiration for it all was revealed to be right between the two actors and their own whirlwind of a friendship. The comedy was clever and the actors’ performances granted us all with a gift worth giving, a contagious sense of humor.

The Bond, a powerful short about incarcerated mothers and women with child. Ashley Wilkerson’s performance as the lead, Aria, delivers. Aria is pregnant and fights to attain model status to keep her baby and get accepted into the nursery program at the facility. Wilkerson allowed the emotion and power to guide her performance. Intuitively, she trusted where the character and the character’s circumstances carried her. On top of the performances, director  Jahmil Eady made the direct decision to humanize every character in the script. This includes not only the pregnant incarcerated women but the nurses in the hospital, to even the male guards who arch from their original notions and assumptions about the women.

The short hit all of the pivotal arching moments for the lead and her journey, including the

pivotal scene where Aria gives birth in the hospital. She is handcuffed to the cot pushing with her might with the cuff’s chains rattling as she fights to keep delivering. We see the fight within her own mind for herself and for the child. It was not only scenes like these that moved audiences, but the connecting factor that this was the birth story of director, Jahmil Eady.

A father and son’s journey of grief. Chorus opens with a father cooking up breakfast for his son until Jules (Charlie Shotwell) drums a beat. He crashes the symbols and his father leaves the stove to join in with his guitar. The noise echoes through their home, a bonding moment between the two. The noise doesn’t only cancel out the smoke detector from the burning breakfast but the ringing phone and beep of the voice message. That message was the last words she would ever give to her son and husband. All happens on the morning of 9/11.

Shotwell’s performance as Jules and Tate Ellington’s as the father carried all of the weight between a grieving relationship between father and son. Writer and director Daniel J. Egbert’s script was eloquently delivered into this vision. From the locations, to the lighting, to the sequence of character building throughout, it all was reflective of the journey between the two. Every aspect had a direct purpose. From beginning to end, audiences watched and waited on the edge of their seats, to see what could come together of the two’s relationship.  There is no right answer to grieving a loss from a tragedy such as 9/11.

In that very audience watching the screening at the festival was the man who inspired the film itself, the director’s father, a first responder officer on 9/11. Egbert dedicated this piece to him for his courage and strength. While thanking his family for his secondary inspiration for their connection and bond through their love of music.

*see Rachael’s previous review of Coffined at 15 by Gayatri Kumar, part of the same shorts track at Dances With Films.

Photos courtesy of Dances With Films.