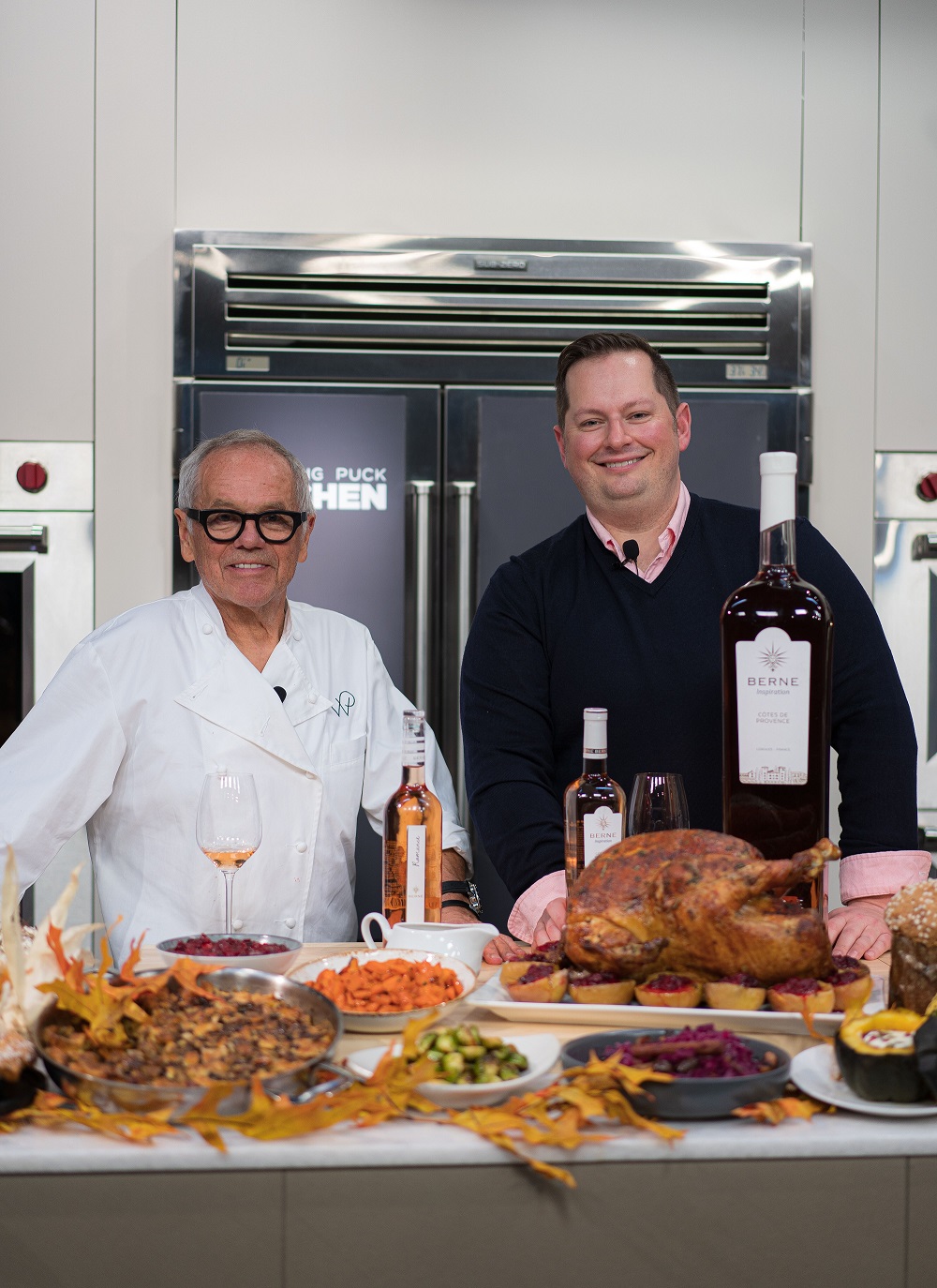 “A Perfect Pairing,” premiered virtually worldwide at 4:30 PM PST/7:30 PM EST on online platforms, including Château de Berne‘s Facebook, and others, and will be available post premiere to watch throughout the holiday season.

“We are honored to have worked with the world’s most celebrated  chef Wolfgang Puck, and rising sommelier star Jon McDaniel, to present ‘A Perfect Pairing,’” comments Gaudreau. “We feel it truly is a perfect pairing on all levels, Chef Puck and Jon with excellence in food and wine.”

The name Wolfgang Puck is synonymous with the best of restaurant hospitality and the ultimate in all aspects of the culinary arts. The famed chef has built a brand that encompasses three companies: Wolfgang Puck Fine Dining Group, Wolfgang Puck Catering and Wolfgang Puck Worldwide, Inc.

Wolfgang Puck was born in Austria and began cooking alongside his mother at a very young age. A chef herself, she encouraged Wolfgang and inspired his passion for food. So driven and inquisitive to learn, he started his formal training when he was just fourteen years old. As a young chef, he worked in some of France’s greatest restaurants, including Maxim’s in Paris, the Hotel de Paris in Monaco, and the Michelin 2-starred L’Oustau de Baumanière in Provence.

At the age of 24, Wolfgang took the advice of a friend and left Europe for the United States. His first job was at the restaurant La Tour in Indianapolis, where he worked from 1973 to 1975. In 1975, Wolfgang came to Los Angeles and very quickly garnered the attention of the Hollywood elite as chef of Ma Maison in West Hollywood. He had an innate understanding of the potential for California cuisine, and was pivotal in its rise to national attention during the late 1970s.

After leaving Ma Maison, Wolfgang opened his first flagship restaurant, Spago, in 1982. Located in West Hollywood on the Sunset Strip, Spago was an instant success and culinary phenomenon. Wolfgang and Spago earned many accolades during its popular eighteen years in West Hollywood, including winning the prestigious James Beard Foundation Award for Outstanding Chef of the Year in 1991 and 1998, and the James Beard Foundation Award for Restaurant of the Year in 1994. Wolfgang is the only chef to have won the Outstanding Chef of the Year Award multiple times.

Jon McDaniel is the founder and CEO of Second City Soil, a Chicago-based wine consultancy with the mission of growing Chicago’s wine culture through winery and restaurant marketing and educational partnerships. Jon is recognized as one of the top wine professionals in the U.S., having worked in every facet of the business – from creating high-profile wine programs at several internationally acclaimed restaurants, to developing revenue-generating brand growth for numerous wineries around the world. Through Second City Soil, he also works with multiple wineries, international organizations and global wine festivals as an ambassador on marketing, education and sales development.

Winner of Food & Wine Magazine’s Sommelier of the Year in 2018, Wine Enthusiast “40 Under 40 Tastemakers” in 2017 and Riedel Crystal International Sommelier of the Month in November of 2016, he was recently named the United States Academy Chair for “World’s Best Vineyards”. Jon has been featured in Wine Spectator, Wine & Spirits Magazine, Forbes and World of Fine Wine Magazine. In 2016 and 2017, five of World of Fine Wine Magazine’s Top 100 Wine Lists in the World were under McDaniel’s direction.

In 2015, he was knighted into the Order of Snodar in Valpolicella, Italy and knighted into the Ordine dei Cavalieri del Tartufo e dei Vini d’Alba in 2019. He is an Adjunct Professor of hospitality management at Roosevelt University in Chicago, a Hospitality Fellowship Chair at The University of Texas at Austin and the owner and winemaker of Amos Cellars, a critically acclaimed Sonoma County wine brand.

His new project, The Vine Hive, a global wine consultancy firm with the mission of bringing the wine community together for local, national and global wine campaigns and digital content promotion, is currently in development. He also is the Secretary and sits on the board of the United Sommeliers Foundation, an organization founded in the wake of the COVID-19 crisis to help raise funds for out of work and in-need wine professionals.

Wines available at your local grocers and at wine.com