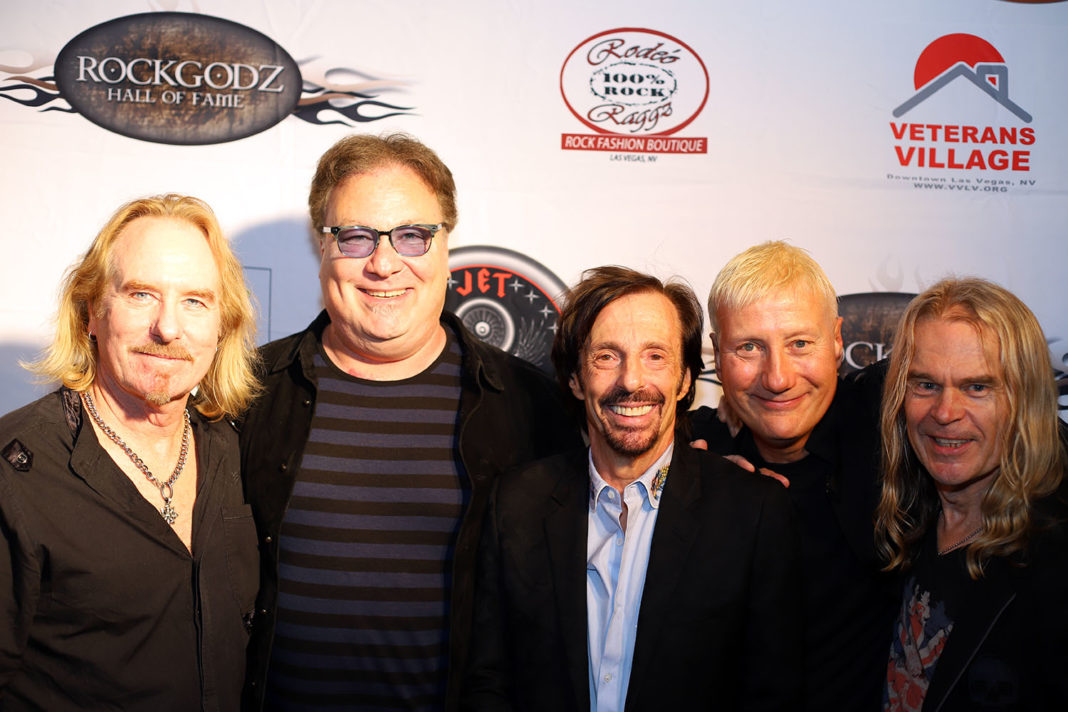 The 2019 inductees of eighth annual RockGodz Hall of Fame were celebrated on Sunday, October 27 at The Canyon Club in Agoura Hills, California. The annual event recognizes those who have built the legacy of rock music, honoring incredible artists and their work.

The 2019 RockGodz Hall of Fame inductees are:

Alex Skolnick, an original member of Testament and a respected New York improviser of multiple styles. Emerging as one of the original melodic thrash guitarists, he has gone on to release several critically acclaimed albums with the Alex Skolnick Trio.

Award-winning composer and multi-instrumentalist Brett Tuggle is one of the most in-demand players in the music industry having toured and recorded with such artists as Fleetwood Mac, Jimmy Page, David Lee Roth, Chris Isaak, and Steven Tyler.

Burleigh Drummond, a founding member of Ambrosia in 1970, who has also performed, recorded and produced with Alan Parsons, The Lost Dogs, Player, Bill Champlin, Mighty Mo Rodgers and Michael McDonald.

Grammy Award-winning producer and musician, Jeff Bova won the “Album of the Year” Grammy as a producer on Celine Dion’s Falling Into You. Bova is featured keyboard and synthesizer player on recordings by Meat Loaf, Robert Palmer, Eric Clapton, Iggy, Pop to name a few.

Jim Keltner is best known for his session work on solo recordings by three of The Beatles, George Harrison, John Lennon, and Ringo Starr.  He and Starr were the drummers on the Concert for Bangladesh, rock music’s first charity benefit at Madison Square Garden in New York. In addition, he has also worked with Bob Dylan, Leon Russell, Eric Clapton, Neil Young, and many others.

John ‘JR’ Robinson has become the most recorded drummer in history, having played on over 500,000,000 records. Some of the hits include We Are The World, All Night Long and You Are by Lionel Richie, I’m Just A Gigolo and California Girls by David Lee Roth, Higher Love, The Finer Things and Back In The Highlife by Steve Winwood, Change The World by Eric Clapton, to name a few.

Founding member of Player, Peter Beckett enjoyed success following the band’s number one single Baby Come Back, which was written by Beckett and J.C. Crowley and sung by Beckett. Their second single This Time I’m In It For Love reached #10. Concurrently, he spent nine years touring with Little River Band as a song-writer, vocalist and rhythm guitarist.

Rachel Bolan is the co-founder and songwriter for the band SKID ROW. He also produces other bands and writes songs for other artists, sports teams and with Snake, writes music for ESPN.

Award-winning broadcaster and a pioneer in radio, Rita Wilde was named Program Director at KLOS, the premiere rock station in L.A., at a time when women were barely visible in rock radio. As an on-air personality and music director at various Southern California stations, Wilde has had a decades-long career and has interviewed the most significant legends in music.

Multi-platinum and multi-Grammy winning producer, mixer and engineer, Ross Hogarth has been working in the music industry for over four decades. Some of his timeless work includes Motley Crue, John Mellencamp, John Fogerty, Ratt, Dio, Jewel, Melissa Etheridge and REM.

Rowan Robertson joined the band Dio in 1989 when he was 17 years old, and played on the 1990 release, Lock Up The Wolves. Rowan currently plays for the hit Las Vegas show Raiding The Rock Vault that has won number one ‘Best Of Las Vegas ‘ award, five years running.

RockGodz Hall of Fame was founded by Cindy Landeen and Steve Rosen.